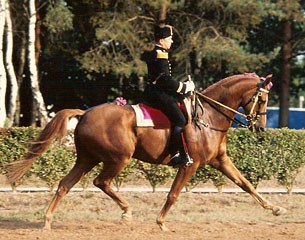 In the autumn of 2010 Eurodressage’s chief editor Astrid Appels asked the readers of Eurodressage to send suggestions for a topic they would like to read an article on. Colonel Christian Carde was one of the proposals

and as Eurodressage reporter Silke Rottermann was going to spend a week in Paris at the beginning of November she was kindly asked to meet one of France’s greatest horsemen of the past decades.

This is the third instalment of Rottermann's interview with Colonel Christian Carde. Read Part I and Part II here

A Critical Outlook on the Future of Dressage

It is not often that an interview starts with the offer “You can ask me any questions you like and I will try to answer them”. Christian Carde is a representative of pure classical dressage in the French tradition and known to be an outspoken opponent of any form of rollkur riding. As one of only a handful trainers he has looked upon dressage from different angles in his position as international dressage rider, FEI judge and national coach of France. 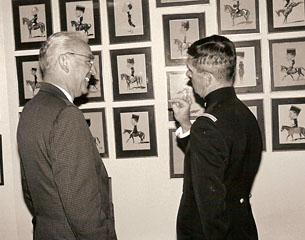 Moreover Carde is in the enviable position not to own any official functions or responsibilities. “I am a completely free man, I am not dependent on anybody and so it is easy for me to complain. In contrary to some others I am allowed to complain because I have experienced it all myself and I know what I am talking about!” Carde stressed while sitting opposite me in the big living-room of his stylish estate not far from Saumur, France.

I have prepared some questions or rather listed some topics I would like to hear the Colonel’s opinion on, but very soon I notice my list is more than dispensable: The state of today’s competitive dressage, the system of judging and the FEI regulations are topics which Carde holds near and dear.

Very quickly one can discover that he, very unlike some other representatives of classical dressage, does not criticise by doubting a whole system. There is no emotional accusation, just clear and objective assessments. With impersonal I do not mean the "my system is the better one, forget about the rest"- statements we so often hear from others. It is refreshing and makes the conversation easy and interesting. 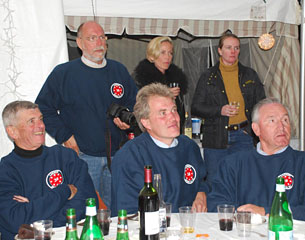 But this is the first crucial point: What is classical dressage? Many people use the term, but in fact mean very different things with it. For a group of people classical is what is displayed at the still existing academic schools like the Spanish Riding School, the Cadre Noir, the Royal Andalusian or the Portuguese School of the Art of Riding, though even these schools differ in the execution of dressage and the masters they refer to.

However for competitive dressage the FEI rules define what classical dressage is.  These were once inspired by the classical equitation of almost a century ago and they should not be doubted, but rather their application.

“The problem we have nowadays and not only since yesterday is that the rules have remained the same, but the context in which dressage happens has changed tremendously. And this context on the other hand influences the way dressage is judged," Carde explained.  "Let me summarise it: The first problem is that to compete in dressage competitions you need lots of money to buy the proper horse. Good equitation is not enough anymore, you also need a horse with outstanding paces. Often you need a sponsor to do so and he wants something in return, of course. So the riders have to work under pressure and the desire to win increases the temptation to cheat in the training of a horse. This, in my opinion, caused rollkur riding. Very sadly the end often justifies the means."

Undoubtedly dressage has become a much more professional sport than it used to be when Carde competed in the 1970s and 80s, but the question still remains why a method like rollkur could become so popular.

“The most serious problem dressage has is that the judging isn’t done strictly according to the FEI rules anymore. For me the judging has come to the end of the road by leaving the official scale and it will be interesting for young people like you to see how this will evolve in the future. For example there is the general tendency to place horses with exceptional paces higher than less spectacular but better ridden ones. This puts dressage in general in danger, not only at the highest levels. There is a gap between what is actually happening in dressage and the FEI rules and this is the point which should be discussed. The future of dressage strongly depends on how riders are judged as well as on how the eye of spectators is formed by what is presented wrongly but scored highly," Carde emphasised. 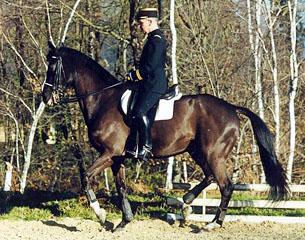 For him a serious danger lies in the fact that the young generation might never learn what classical dressage is because proper trainers are a dying breed. Instead they learn to ride successfully in competitions in which according to Carde the classical principles are no longer upheld the way they should.

“Article 419 of the FEI rule book states the reason why there are dressage competitions at all: According to this article they should be the conservator of equestrian art and the purity of its principles so they can be handed on to the generations to come. How can this happen without the principles being respected anymore?”, Carde asked shrugging his shoulders.

Article 419 states: The FEI instituted an International Dressage Event in 1929 in order to preserve the Equestrian Art from the abuses to which it can be exposed and to preserve it in the purity of its principles, so that it could be handed on intact to generations of athletes to come.

He cannot understand why FEI article 401 still exists in the original version while there are horses being highly placed or even win which show no “soft and light bit contact”, whose “head doesn’t remain slightly in front of the vertical” and whose “poll is neither supple nor the highest point of the neck.”

Article 401 literally states: The object of dressage is the development of the horse into a happy athlete through harmonious education. As a result, it makes the horse calm, supple, loose and flexible, but also confident, attentive and keen, thus achieving perfect understanding with the athlete.

For him there is only one way out: “In my opinion dressage is really at a turning point.
Either the official rules like article 401 must be followed or they have to be changed and adapted to what has happened in dressage. Anything else is unacceptable for me.
I am by far not the only one who is missing a reference to classical dressage in the sport. Also many other people once interested in dressage cannot see it and as a result lose interest.” 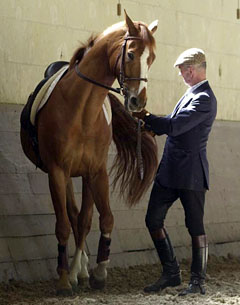 Complaints are easily made, but what about practicable modifications? Carde himself is aware that it is not easy to put words into practise.

“I once suggested marking the warm-up as well. Of course it’s not easy. How should this be done and in which way the marking could influence the result? For example a rider could get bonus points for an exemplary warm-up. Another idea could be to get extra points for riding a horse with a loose or even without a noseband, which could be controlled by a steward before entering the arena. How can a mouth be relaxed with  nosebands so tight that the horse is unable to swallow? And why not come back to what was demanded until the 1960s: An obedience jump after the competition. Horses which jump it calmly after the dressage test could get bonus points awarded as well. It could be comparatively easy to find out the most classical trained horses by doing such modifications," he professed.

"I am absolutely convinced that such renewals are urgently necessary for the future of classical dressage, but at the same time I am completely aware that it is hard to establish them at the moment. There would be very strong opposition from all who profit a lot from the current situation and there are many.” 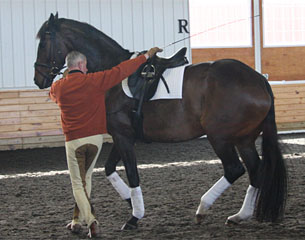 After a life dedicated to the horses and to this disappearing art of classical dressage Carde could easily retire to privacy and enjoy his retirement with his family. But instead he travels the world giving clinics and attending symposiums. He writes articles about dressage with a sharp pen and by doing so risks putting himself in the crossfire of a sport he once felt associated with.

Can a man like him ever retire? Carde smiled when I asked the question and pointed to the window which gives view to a park-like garden of his estate: “Don’t worry, I have enough time to do gardening which I like very much, as well as work my horse and enjoy life. Now I am over 70, unfortunately, because the years are passing by so fast and life still is so very interesting. I continue because the main disaster would be that the young riders would mix up what is good with what is wrong. And I must help to prevent that. Moreover military people are used to defend difficult causes even if they are burdensome …probably it is in my frame!"

A man like Christian Carde should never be allowed to retire, because dressage has too few of them.