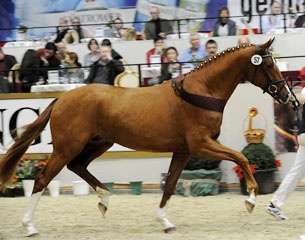 The 2010 Brandenburg Stallion licensing in Neustadt/Dosse became a Quaterback extravaganza with four out of 16 licensed stallions, including the champion, being sired by Landgestut Neustadt/Dosse's money-maker Quaterback (by Quaterman x Brandenburger).

The chestnut Quaterback x Paradiesvogel offspring was proclaimed champion of the licensing. The colt bred by Detlef Meister was the best out of 11 presented Quaterback colts. The well moving, modern looking chestnut with a super trot but poor walk sold for 210,000 euro to at the auction following the licensing. Gestut Sprehe, who has been heavily investing in stallions this year, acquired the champion. Sprehe also bought 50% in the ownership of Millennium, the second reserve champion of the Trakehnet licensing, and owns the Holsteiner reserve licensing champion.

Another dressage stallion which impressed the selection committee and crowds was the Belissimo M x Donnerhall x Grundstein II offspring. Bred by Heinrich Hoeffner and owned by Heinrich Ramsbrock, this stallion sold for 75,000 euro to the Gutman family of Gestut Bonhomme.

Sixteen out of 49 stallions in total was licensed. The average priced for a licensed stallion sold at auction was 62,900 euro. The most expensive horse sold at the auction of sport horses was Sir Piko, a Sir Donnerhall x La Piko S offspring. He sold for 53,000 euro to France.

Next week seven Quaterbacks will be presented for approval at the 2010 Oldenburg Stallion Licensing in Vechta.