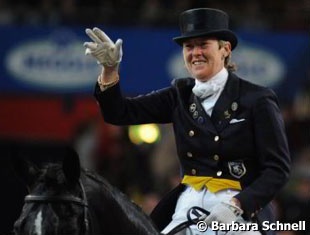 Six-time Olympic dressage rider Kyra Kryklund confirmed to St. Georg that she has been elected the new president of the International Dressage Rideres Club (IDRC). She was voted president by the IDRC members on 18 August 2010.

The Finnish born and British based Kyrklund stated that she wants to continue the work of her predecessor Margit Otto-Crepin. The IDRC attempts the improve the influence of the riders in the FEI Dressage Committee in which they have one seat covered by Otto-Crepin until a new election in 2011.

Important themes in which the riders want to give more input are, for instance, the way judges are trained, the Olympic format as well as the team championship format.

Kyrklund was the vice-president of the IDRC since April 2010. Wayne Channon is IDRC secretary general.