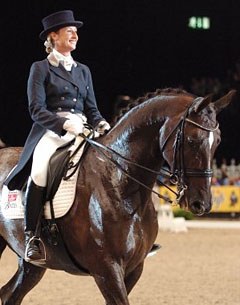 The pair scored an impressive PB of 73.15% to lead the field almost 3% clear of their nearest rivals as well as taking third in the grand prix.

“Absolutely amazing!” was Amy’s delighted response “I still can’t believe it, I’m such a wet and cried when they played the National Anthem but it means so much. It’s been such a beautiful show and Macbrian has been brilliant, I couldn’t fault him! It was so hot but he coped really well, he was maybe a little bit tired for the freestyle but that’s often no bad thing as he does have a tendency to get tense.”

Amy explained: “We’ve been working on our transitions between piaffe and passage and they’re so much better, our pirouettes felt good too but there’s still lots of room for improvement. That’s no bad thing and we’re just hoping to keep our percentages up now.”

Amy is a member of the World Class Development Squad which aims to identify and support talent upcoming talent in the sports of dressage, para dressage, show jumping and eventing. She and Macbrian will now compete at Vierzon CDI, France, 7-11 July and also plan to campaign Hickstead CDI later this month.