Spanish Team Returns to Its Winning Ways at 2010 CDIO Saumur 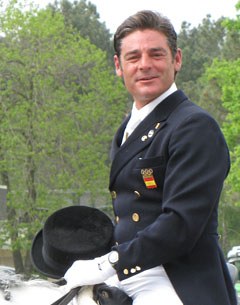 Spanish Grand Prix riders love the CDIO Saumur. In preparation for various championships over the past few years the Spanish A-listed riders have successfully used Saumur as warm up event leading up to the big summer shows. This year it was no different. The Spanish team won the CDIO Nations' Cup and Juan Manual Munoz Diaz was unbeatable in all three big tour classes.

The Spanish delegation travelled to France as an armada of seventeen combinations showing at all levels except the pony classes. Swiss based Spanish Morgan Barbançon swept all trophies at junior riders level, while four young riders, three small tour riders, three CDI Grand Prix riders and four on the CDIO team put the pressure on in their division. 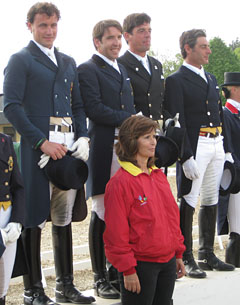 Juan Manuel Muñoz Diaz became the anchor of the Spanish team riding the highest scoring tests, winning the Grand Prix with 72,085%, the Special with 73,583% and the Kur to Music with 76,500%. His loyal partner is Miguel Angel Cárdenas' 12-year old Andalusian Fuego XII (by Utrerano VII x Elegido).

The Nations' cup team victory of 4956 points was achieved with the help of Claudio Castilla Ruiz on Jade de Mv, Rafael Ortiz on G Nidium and Jordi Domingo on Prestige. The Belgian team placed second with 4827 points, followed by Great Britain with 4716 points

The last time the Spanish team was in the medals was at the 2005 European Championships. They shared the bronze with Sweden, after having claimed silver the year before at the 2004 Olympics in Athens. Spanish team trainer Jan Bemelmans has been working hard at replacing the old team with young, new combinations that can perform up to par.

2010 World Equestrian Games are Aim of the Season 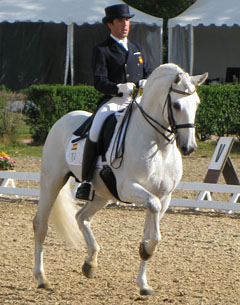 Spanish long listed Grand Prix riders will be competing throughout Europe this spring and summer to find their firm and obtain scores for the WEG team qualification. The season kicked off at the 2010 Sunshine Tour CDI in March after which a long list of seven combinations was set. The include:

Beatriz Ferrer-Salat and Faberge will probably join this long list in the next months.

Spain Has a Good System for Working Towards WEG 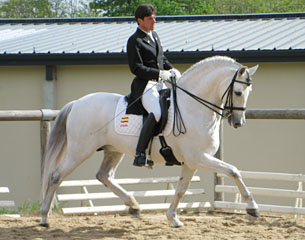 Team trainer Bemelmans and chef d'Equipe Bobby de Bobadilla marked the CDIO Saumur and CDI competitions in Vierzon, Pompadour, Cappeln and The Hague as qualification events. Depending on the riders' results at these shows a team will be chosen.

Belgian born but German based Jan Bemelmans has been travelling to Spain on a regular basis to train confirmed as well as up and coming combinations. Clinics are hosted in Barcelona, Madrid and Jerez de la Frontera to minimize the travelling time of the horses. Jan was in Spain one week in January, one week before the Sunshine Tour and he'll return for one week in May during the CDI Nambroca and in November during the National Championships. On each trip, Bemelmans evaluates approximately thity horses. 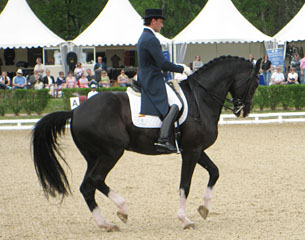 The clinics are not obligatory to the riders. "Some always come to the clinics others sporadically," de Bobadilla told Eurodressage. "It all depends on their level and needs, but the long listed combinations always come."

After the CDI Vierzon the long listed team will stay at Bemelmans' stable in Krefeld, Germany, for intense training sessions. They will remain there until the official team has to leave for Kentucky. Those not going will return to Spain.