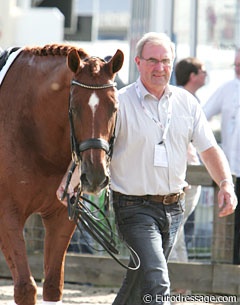 Austrian entrepreneur Herbert Jerich has paid for 50% of the ownership of Parzival and secured co-owner Adelinde Cornelissen the ride on her gold medal winning horse. At the 2009 European Dressage Championships in August, co-owner Henk Koers proclaimed that he wanted to sell his half of the horse, but Cornelissen could not afford the other half. Jerich has now come to the rescue.

Through Jerich's help, Cornelissen is now 100% owner of the 12-year old Parzival (by Jazz). Jerich has become Adelinde's new maecenas, as he had already given her the ride on his Hanoverian Grand Prix horse Wunschtraum in the autumn of 2009.

Jerich, who owns an international transport company, will be sponsoring Adelinde through 2013 and Parzival will now be competed under the name "Jerich Parzival"