Dynasty, A Horse Who Lived Up To His Name 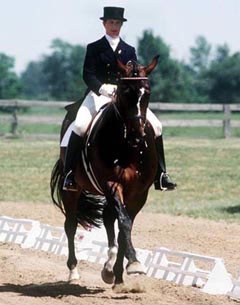 When Cindy Ishoy showed her recently purchased three-year-old named Disco 16 to the legendary horseman Willi Schulteiss in 1981, he said, “Cindy. Why did you buy that thing? I expected a lot more of you.” Cindy slunk out of Schulteiss’ ring at Warendorf, and later that year brought him home to Canada.

He was purchased for her by long time supporters and sponsors Charles and Janet Burns, whose daughter Dinny was Cindy’s best friend until her death from cancer in 1983. When Cindy got the young Hannoverian by Darling, she said to herself: “there is no way I can ride a horse called Disco 16.” At the time she was reading The Bronfman Dynasty, Peter Newman’s book about the rise of the Bronfman family in Canada. “In my youthful arrogance I thought, this horse is going to start a whole new dynasty in dressage in Canada. I needed a ‘D’ name, so that’s what I called him.” Cindy adds that although the prime time soap opera of the same name was on the air, she wasn’t aware of its existence, having been living in Germany, and having no interest in that kind of show. “The last thing I would ever do is name a horse after a soap.”

The newly renamed Dynasty came home to Canada and proceeded to be a difficult three and four year old. “I almost came off a few times. He could buck but he would also rear up, walk down the ring on his hind legs, then drop down and bolt. He was always confident, though. You didn’t need to worry about him ever falling.” Dynasty’s confidence and physical abilities meant that the training went quickly. By the time he was six he was competing in Europe in Prix St. Georges and Intermediaire I. “It was easy for him except he was a bit of a lunatic.” His tests were either very good or terrible, nothing in between. At one show in Europe he did well in the Prix St. Georges, “but in the I-1 I don’t think there was a movement that didn’t have a technical mistake in it.”

On the way home from Europe, Dynasty fell in the plane coming home and put his leg through the back of the partition of his container. Following a harrowing few minutes of removing the bandage and widening the hole with a crowbar taken out of a Lamborghini that was also on the plane, Dynasty’s leg was freed, but he suffered a terrible injury. Back in Canada a few hours later, Dr. Tony Calverly stitched back an almost severed ligament, as well as tissue and skin. There were 180 sutures by the time he was finished. Thanks to his work, however, Dynasty’s life and career were saved, and after a year off he was back in work.

When he was just eight years old, Dynasty debuted at Grand Prix, and although he only did a few shows that year he won every class. Between then and 1989, he and Cindy set off on an incredible climb to heights of international stardom never seen in Canadian dressage, before or since. They were seventh individually at the 1986 World Championships in Cedar Valley, Ontario, and the following spring at the World Cup Final they finished fourth. At the 1988 World Cup they flew even higher, finishing second behind two time winners Christine Stückelberger and Gauguin de Lully. Later that same year at the Seoul Olympics, Canada brought home its only medal ever in Olympic dressage, the bronze. Dynasty’s performance was the biggest part of that medal, and he finished a hair’s breadth away from individual bronze, in fourth position. “He was absolutely amazing,” Cindy reflects. “At a cocktail party in Seoul, one judge came up to me and said, ‘you’ll have your day Cindy.’”

Tragically, Cindy and Dynasty never did have the day that the judge alluded to. Dynasty injured himself while free lunging at home the following March – a horrific tendon injury that is the result of a hyperextension of the hind leg, but that often heals completely. Within several months Dynasty was under saddle again. “He was sound and happy to back in work.” Shortly after that, he colicked. A section of his intestine had passed through a lesion in the gut wall. The surgery at Guelph was successful, but at some point a blood vessel was ruptured. Dynasty was given over twenty quarts of blood and clotting drugs to try and stop the internal bleeding, but he could not be saved. “He hadn’t got up from the surgery, he was still lying down,” Cindy remembers. “It was so sad. He looked perfect. I asked the vet, ‘why can’t you fix it?’ I was in pieces and the vet felt so badly.” But Dynasty wasn’t coming back, and Cindy understood.  “I had to let him put my best friend to sleep.”

Cindy still misses Dynasty every day. “My whole life revolved around what to do with him. Along with Neil and my daughter Kahla, Dynasty was everything. The next morning I didn’t even want to get up.” But Cindy didn’t take a break from riding, and since that day she has had many highlights in the ring with other horses. For a while it was difficult for her to develop a bond with other horses, because she was always looking for another Dynasty. “What I have learned is that with each new horse you try you have to discipline yourself to accept them for what they are.”

When Cindy was at the World Cup final earlier this year with Proton, a woman came up to her and said, “I remember you from Essen in 1987.” That year, Equitana and the World Cup Final were in Germany, and Willi Schulteiss was scheduled to do a demonstration freestyle. When something happened to the horse he was supposed to ride, he took Cindy up on her offer to use Dynasty. The crowd went wild after the performance, and Dynasty would passage out the door at one end, only to reappear passaging in through the door at the other in encore after encore. Later, after Cindy’s fourth placed World Cup performance, the German audience whistled their disapproval at the score, and later gave Cindy and Dynasty a standing ovation in the awards presentation. “It was probably the most emotional moment I ever had with him.” In the end, Schulteiss admitted that Cindy was right, and he had been wrong. “Dynasty is still the biggest piece of my career as a rider. To have that privilege is amazing. Instead of being sad for what didn’t happen, you have to be happy with what you did have.”