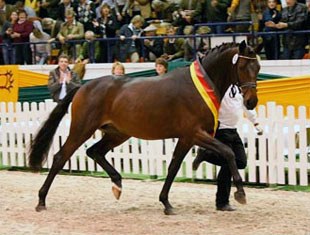 Kentucky has been proclaimed champion of the 2009 Trakehner Stallion Licensing in Neumunster, Germany, on October 25, 2009. This big moving stallion by Donaufels out of Kaiserin (by Lehndorffs) impressed with his conformation and movements

Bred by Dirk Müller from Reichshof and owned by Herbert Stefan Schümann, Kentucky attracted the interest of many stallion owners. Gestut Wiesenhof in Krefeld put in an effort to acquire the stallion at auction. They paid 250,000 euro for him.

The reserve champion was All Inclusive (by Gribaldi x Buddenbrock). He sold to Petra Wilm, president of the Trakehner society, for 240,000 euro. The third highest ranked stallion was Legretto (by Imperio x Friedensfurst) which sold for 120,000 euro.