Emotional Hattrick for Cesar Parra at 2009 Dressage at Devon 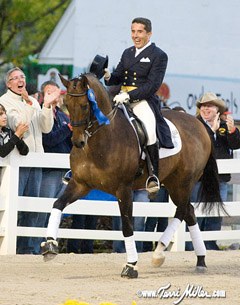 American dressage rider Dr. Cesar Parra achieved a rare hattrick, clinching the victory in all three small tour classes at the 2009 Dressage at Devon international dressage competition September 24-27, 2009. The Colombian born Parra, who became an American citizen one year ago, had an emotional week in Devon coming back to the big time after an almost three-year struggle being without top horses.

Aboard Lori Washton's 13-year old Dutch warmblood gelding Olympia (by Jazz), Parra won the Prix St Georges with 72.456%, the Intermediaire I with 72.193% and the Inter 1 Kur to Music with 73.850% at Dressage at Devon, one of the biggest international dressage competitions of the year on American soil.

"It was a very emotional week for me," Parra admitted. “There’s something mythical about having a hattrick. I did it in 2003 with Pik L as a Colombian and now I’ve done it as an American."

Parra is very focused in the show ring and tries to ride on the edge without compromising the horse's training level or overasking him in the ring. "I’m always thinking in the ring. I know what the horse can and can’t do, so I negotiate with him. Olympia is a really hard working horse and he never quits. He's so wonderful to ride and I can always rely on him," Parra said with a smile. 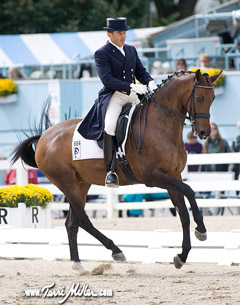 Washton's Olympia is a small tour star, but he is not cut out for the Grand Prix work. "It is totally unfair to any horse to ask more than his potential," said Parra. Olympia doesn’t have the strength for Grand Prix and as a trainer I must be honest with my students and clients. I have to up front with them and tell them "it is what it is, this is what your horse can and can’t do"," said Cesar.

Parra hopes to find a new rider for Olympia, preferably a young rider. "Olympia has paid his dues and deserves a break now," Cesar admitted. "It’s my dream to see him go to a young rider or an ambitious amateur."

In 2007 Cesar Parra experienced several major set backs which tried his character and perseverance. His long time sponsor called it quits, which left Cesar without international calibre horses to keep him in the spotlight as a rider. In July he lost his best horse, the 6-year old licensed Oldenburg stallion Donovan to colic and two months later Cesar suffered a stroke on a business trip in Germany. The split with his sponsor, his lack of top quality horses and his faltering health put his equestrian career on the back burner.

"It was a really difficult year for me. Lots of tears and frustration, but luckily I had a strong team of family and friends I could rely on. Together with my mentor Dr. Moritz they supported me through those tough times. People quickly forget which challenges you faced in the past. But I worked and worked so hard to overcome them. You have to leave behind all the adversity and keep on going."

New friendships and partnerships have helped to fill Cesar's stable again with high calibre horses. Through the support of his friends, Cesar now has the Bundeschampionate finalist Florence and the U.S. Developing Horse Reserve Champion Grandioso at his disposal alongside the super talented but highly sensitive Prix St. Georges horse Furst Fabio. In March 2009 Lori Washton also offered Cesar the ride on her Olympia. 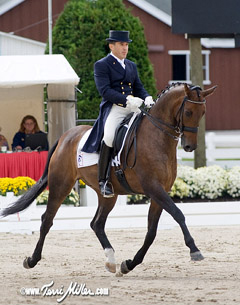 Though the Grand Prix is the most important level of competition, the small tour in Devon is toughest division with 40 competitors from the U.S.A. and Canada chasing each other for the blue ribbon. "Devon was amazing, it was such a good feeling to be back again as I have been the underdog. I was amazed at how much pressure I felt to perform. To come back one more time an accomplish a hattrick. The first time everyone is friendly and happy for you, but the second time you feel much outside pressure," he confessed.

Cesar is ecstatic about his American citizenship. "In South America you would never get the opportunity to climb up again, but here in the States you can do it. I'm so proud to be an American."

For 2010 Parra has set his goals an breaking through at Grand Prix level. "Who knows, maybe the World Equestrian Games are within reach?!"