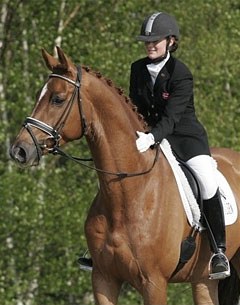 In Denmark, the first selection trial for participation at the 2009 World Championships for Young Dressage Horses has taken place last weekend at the Møllebakkens Rideklub. Three 5-year olds and three 6-year olds have been selected for the selection trial finals later on this season.

The qualified 5-year olds are:

The qualified 6-year olds are:

Denmark is allowed to send four horses per age division to the Championship. Only Danish warmbloods and Danish registered Trakehners (TAF) are allowed to represent Denmark in Verden.

The next three selection trials are held at:

The Final selection trial, where the Danish team will be chosen, is held at the Middelfart Ridecenter in Middelfart, Denmark, on 4 -5 July. Twenty horses in both age divisions will be allowed to go to Middelfart. The best 12 of them will compete on Sunday for the 4 available places for Verden.