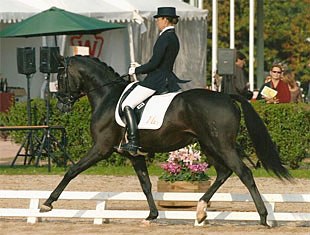 The gorgeous black stallion Prince de Hus, also known as Prime Time, has severely injured himself breaking his hip in his stable at home at Haras de Hus in France. Veterinarians are doing everything to help the stallion but at the moment it is uncertain if he will recover.

The Hanoverian stallion Prime Time (by Prince Thatch xx x Wenzel) made headlines as a 2,5 year old by selling for 580,000 euro to Blue Hors Stud in Denmark. Due to fertility problems, Blue Hors returned the stallion to the Hanoverian Verband which then sold it to French millionaire Xavier Marie of Haras de Hus.

In house rider Jessica Michel brought the stallion to first acclaim in the show ring. As a 4-year old he was the 2007 French Young Dressage Horse Champion. 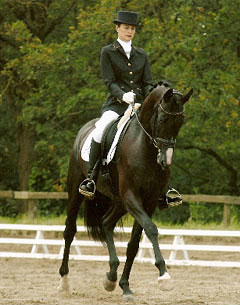 Now that the stallion's recovery is uncertain, his former rider and heartstruck Jessica Michel wrote a moving account about her Prince: "You who I believed in, you who I had confidence in, you who I chose, you who I made Haras de Hus buy as first horse, You who proved me right for choosing you by becoming a champion, you who has been taken away from you, I'm thinking of you Prince."