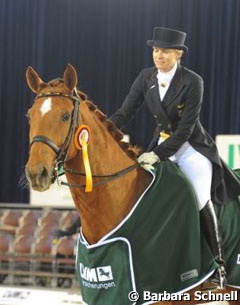 It's fun to see how fast Elvis begins to sparkle again now that Nadine and Klaus Balkenhol training together again. I just love that pirouette photo -- Elvis in a snaffle, Nadine sits relaxed and gives way with her hand, Elvis has his ears pricked forward and his eyes shine.

Capellmann also competed and won with Raffaldo in the Short Grand Prix.

Klaus Balkenhol must have been the busiest man in Munster -- besides Nadine, he also worked with his daughter Annabel, with Kirsten Sieber and with Katharina Winkelhues on Nadine's Rino. He also found the time to chat with Paul Stecken (who trains Ingrid and Michael Klimke). 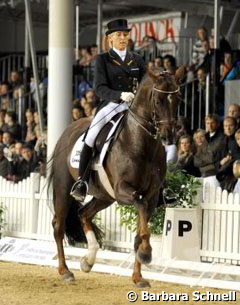 Damon Hill's much anticipated first Grand Prix ... still needs precision, but it was full of promise. It will be fun to watch that lovely piaffe-passage work come to full fruition. Well done!

In the Grand Prix tour, Isabell Werth rode Apache, but it was even more interesting to watch her do some "morning gymnastics" with Burgpokal winner El Santo NRW (below), whom she had just taken along to keep Apache company. His first show after Frankfurt will be Huenxe, but Isabell isn't sure yet if she'll ride him in the small tour there or if it will be his GP debut. But she aims to ride him in the MedienCup. 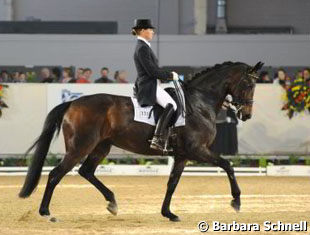 The "Preis der Zukunft", a prestigious nationwide competition for Young Riders, was a debut in more ways than one for Friederike Hahn: She missed her whole last season as a Junior because Richard Löwenherz sustained an injury at the EYC in Bonn last spring, but now he's back, and "Fritzi" (and her laughing mother) didn't know what they were more happy about -- the fact that he's back, or the fact that he did so well in Friederike's debut as a Young Rider.

Katharina Winkelhues won with Rubina after an interesting duel with Kirsten Sieber and Charly. Annabel Frenzen's Cristobal seemed to have a kink in his back in the canter tour of the preliminary test but regained his form and his composure in the freestyle. For them it was the YR debut as well as for Thea Felicitas Mueller and Highway .