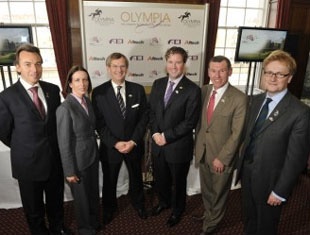 Global animal health and nutrition company Alltech captured the full attention of the equine industry with the announcement that they will sponsor the 2009 European Jumping and Dressage Championships in Windsor, Great Britain. With this new sponsorship agreement, Alltech, already sponsor of the 2010 World Equestrian Games, is now title sponsor of two of the largest FEI Championships in the world.

“In 2006, Alltech made history by becoming the first ever title sponsor of the Alltech FEI World Equestrian Games and today’s announcement represents another first. With the Alltech FEI European Equestrian Games, we are reaching out with our industry partners to each and every horse owner and trainer across Europe as well as bringing the excitement into the homes of millions of television viewers,” explained Alltech’s Founder and President, Dr. Pearse Lyons.

He continued, “our company is all about improving animal performance through nutrition – and our aim is to build the first superbrand in the animal health and nutrition industry. We believe that associating our brand with this international equestrian event and linking it to animals performing at their peak will take us one step closer to reaching this ambitious goal.”

“The FEI is delighted to see Alltech become the title sponsor of one of the highlights of the 2009 sporting equestrian year,” FEI Secretary General Alex McLin commented. “Some of Europe’s best horsemen and women will convene at Windsor for the 2009 Alltech FEI European Jumping and Dressage Championships and we are looking forward to an event of the highest competition and organisational standard.”

Alltech is a privately owned company with 28 years’ experience in developing natural products that are scientifically proven to enhance equine and livestock health and performance. The Alltech FEI World Equestrian Games 2010 will be held in Kentucky, USA from 25 September to 10 October 2010. This 16-day competition will see riders from around the world compete in eight equestrian disciplines, namely show-jumping, dressage, eventing, driving, endurance, vaulting, reining and para-equestrian.