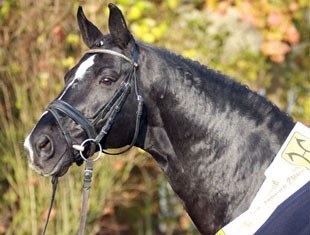 The privately owned stallion De Niro is the Hanoverian Stallion of the Year 2008. The Donnerhall x Akzent II-son was bred by Brigitte Pahl, Fockbek, and licensed in Verden in 1995. Since that time, he has been standing at Klosterhof Medingen.

With this annual award, the Hanoverian Society and R+V/VTV insurance company honours important breeding stallions. At the Verden Stallion Licensing and Auction, breeder Brigitte Pahl was honoured with the Wohlklang-statue and a cheque.

De Niro was born in 1993 and at the Stallion Approval in Verden in 1995 he was already one of the most popular and fascinating stallions. One year later, the black youngster completed his stallion performance test in Adelheidsdorf with the highest dressage score. Rider Dolf-Dietram Keller trained him up to Grand Prix-level. In 2001, De Niro won the German Championships for professional riders and in 2003 he reigned in the German Dressage Derby in Hamburg. Since 2006, he has been successfully competing with his young rider Theresa Wahler.

De Niro’s dam Alicante was successful up to medium level with Susanne Pahl, the breeder’s daughter. She was an active brood mare for only a few years. The impressive result: Her four sons are successful competition horses, two of them, De Niro and his full brother Dimension, are approved stallions. 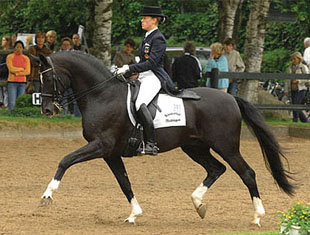 De Niro passes on his excellent rideability and fantastic movements as well as type and expression to his progeny. 1,341 offspring are registered with the Hanoverian Society. 14 of his 22 approved sons are registered with the first-class stallion book, 99 daughters were awarded state premium mare. He is the sire of 123 Verden auction foals and of 109 horses sold at riding horse auctions. 434 progeny achieved placements in the dressage ring up to advanced level and contributed to De Niro’s fantastic dressage breeding evaluation of 147 points. Together with his sons, he has an incredible impact and influence on breeding.

The Celle state stud stallion Dancier (by De Niro x Lancier) won the Stallion Licensing and performance test. Desert Moon and De Janeiro were reserve champions in Verden. De Noir is one of the most popular stallions in Denmark.  Maternal lines featuring De Niro in the pedigree are also very popular. His daughter De Nira is the dam of Hotline, the champion of the Stallion Licensing in 2005. Hotline was the most expensive stallion ever sold at a breeding association’s sales event. Donner de Nero is the dam of the reserve champion of the Stallion Licensing in 2007, Fürst Nymphenburg, who won the stallion performance test in Adelheidsdorf in 2008.