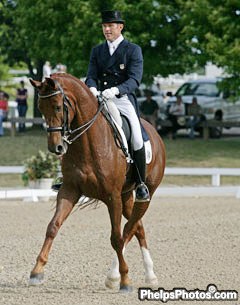 In the newly created 2008 United States Equestrian Federation (USEF) National Developing Horse Dressage Championship sponsored by the Dutta Corporation and Performance Sales International, Guenter Seidel and U II had a strong showing Sunday to win the championship with a total score of 70.873.

Similar to the Young Horse championship, the competitors faced high winds which made their rides difficult and a spooky environment for the horses. Seidel felt he was lucky to draw an earlier time since the winds were not as strong as what the other riders had to face later in the day. Seidel felt that U II (pronounced You Too) did very well with his test.

“Yesterday was a little more difficult, today he was a little more in front of me and even while he was spooky, he didn’t get himself too short and tight,” said Seidel. “Especially for his age, I thought a very solid test.”

Last year Seidel attended the championship as a spectator to observe the first year of the Developing Horse program. Coming back this year as a competitor, Seidel commented that his strategy going into the competition was clearly to win.

“You have to do the best your horse can do on that day,” said Seidel. “You have to work with what you have in the warm up and take that in the ring and make the best of it.” 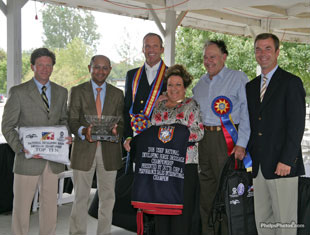 Seidel has been riding U II since he was three-years-old and he hopes to have him ready to compete in the 2010 Alltech FEI World Equestrian Games.

Taking Reserve Champion with a total score of 69.282 was Susan Dutta and Golden Choice DC, who were the leaders going into Sunday’s competition. Golden Choice DC (Gran Cru x Wesbe by Westbury) is a chestnut Hanoverian mare bred in Germany by Hermann Stemmann and owned by Tim Dutta, Inc. Tim purchased Golden Choice at the exclusive and renowned PSI Auction in Ankum, Germany, in 2003.

“I think that I had two really good rides on Golden Choice,” said Dutta. “Both times she was really super. Yesterday I really felt that I had a mistake-free ride. I was really happy with that. Today I had maybe one small mistake but I was so pleased with her because she still focused on me and she listens to me no matter what. She’s just such a good girl that I was really very, very happy with her.” 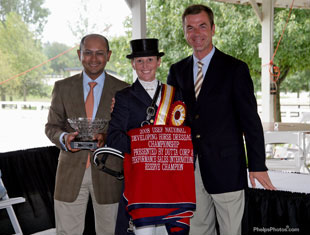 Susan’s husband Tim Dutta along with Performance Sales International (PSI) have been instrumental in supporting the Developing Horse program, helping to grow and promote the championship. Collectively they have significantly contributed to the success of the program. Dutta said that her husband Tim and PSI really believe in the Developing Horse program and that it was fun for her to do so well.