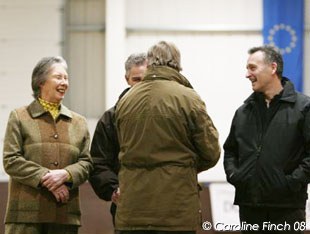 At Addington Equestrian Centre, Buckinghamshire, on Sunday 17th February 2008, International Dressage Trainers’ Club trainers worked with horses and riders to demonstrate and explain to the 500+ audience the essentials of training from young horse classes to Grand Prix.

It was the first time such an event had been held in four years and was attended by Britain’s top trainers David Hunt, Chairman and co-ordinator; Stephen Clarke, Erik Theilgaard, Paul Fielder, John Lassiter, Jenni Loriston-Clarke, Ferdi Eilberg, and Richard Davison.

David and Stephen had the difficult task of clarifying the reasoning behind the selection of young horse champions, emphasising that whilst three good, correct elastic paces, expression and natural energy were very important, the much less easily identifiable qualities of a good mind and a willingness to keep working from easy beginnings to the much more demanding work towards Grand Prix were actually more crucial. 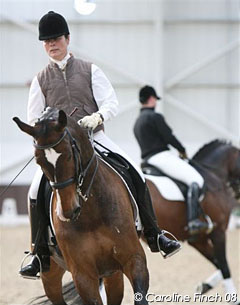 The three horses (Duvie, Showmaker and Streisand) varied tremendously in type, way of going and maturity, physically and mentally.  Stephen underlined that assessors needed a broad knowledge and experience of riding and training many horses, so that such points could be debated knowledgeably.  However, a crystal ball would be a useful asset!

An interesting point was that the rider’s mind was at least as important as the horse’s mind; total focus, a willingness to learn, coolness under pressure and perseverance being some of the qualities needed.   Horses go as they are ridden, and young horses need correct progressive training to realise their potential as natural ability and talent count only for so much.

Paul and Erik, with The Court Jester and Edelstein, stressed the importance of a correct independent seat and the influence the rider has over the horse and the way of going.  Energy management was the role of the rider and this pre-supposed that the rider could sit centrally in balance with the horse at all times.  A carrying hand, supple back and hips that followed and influenced the movement of the horse, a relaxed thigh and lower legs that ‘cradled’ the horse’s rib cage were essential elements of the ‘scales of training’ for riders.

The correct and timely application of simple aids for turning, straightening and controlling the horse come from an independent position which is the most important tool in any rider’s tool box.

John and Char Lassiter took a light-hearted look at lungeing and its perils.  Exercises on the ground and on a chair looked (almost) impossible and none of us has, hopefully, ever sat on such an unbalanced and uncooperative lunge horse.  Very funny but perhaps a real lunge session afterwards would have driven home the point that lungeing the rider is crucial to the development of a correct independent seat. 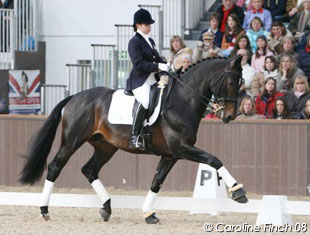 Jennie talked about how to put the horse deep, low and round and Gemma demonstrated the various positions.  The point was made that it was difficult to stretch a horse that is not going forward; the horse must be pushed into the contact from the rider’s seat and leg and then directed up or down via the rein.  Jenni wanted to see bending, loosening, flexing, stretching and swinging, so that the horse was worked over a rounded back into the contact.  She had the audience pull their chins in tightly and feel the discomfort in the back and loins; then she touched her own toes to show the rounded back she wanted from the horse.

Then, how to put the horse up?  With the seat light, i.e. not pushing downwards, the diaphragm raised, the lower leg on sending the horse into a light but momentarily restricting hand, Gemma set her horse up.  Jenni agreed with Stephen that so often there is tension between rider and horse which blocks the movement and prevents the horse from working through.  Horses are pulled in from the front rather than ridden from behind to the rein and this is why judges are unable to give the marks that riders often expect. 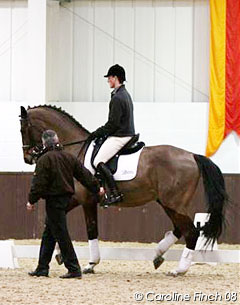 Ferdi and Michael focussed on the importance of the set of the neck and head which affects the horse’s ability to flex and bend.  Aids say ‘this is what I want and how I want it’; then the rider must say ‘now you do it’.  It is not good to keep repeating the aid when the horse is doing what is required; when the bend is set up round the rider’s inside leg and the horse is upright to the outside rein, the inside rein can be light and the horse should remain in position until the rider changes it.

With correctly laid foundations, it follows that lateral work is not a big deal; different angles and variations within the pace help to improve the suppleness and athletic ability.  It is important not to over-face the horse with work beyond his current capability as trust lost takes a long time to rectify.

Richard and Gill worked on the demands of the Grand Prix.  The ability to collect and take weight behind is crucial; without it, the canter work is particularly difficult – the hindlegs need to function to their optimum and the power this requires takes time to develop. 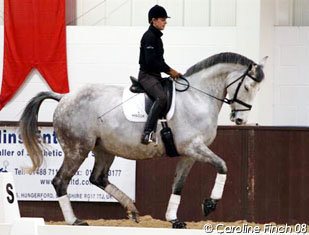 Travers, shoulder-fore and shoulder-in featured largely and, again, it was emphasised that the horse must be able to do the work ‘alone’; constant repetition of the aids just dulls the horse’s reactions.  Fine adjustments of balance and position, together with work on different lines in all paces, achieve the final result of a willing, happy and energetic horse.

The trainers got together to show piaffe and passage; the picture of Komanchi shows what can be achieved with a correct foundation and a rider able to keep the horse wanting to do the work himself.