Dutch Dressage Riders On Course for the 2008 Olympic Games 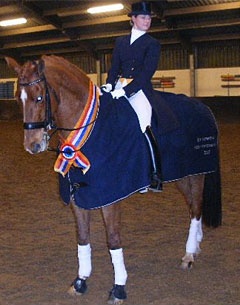 with the riders, media and fans.

Dutch chef d'equipe Mariette Sanders posted a personal update of her experience as chef d'equipe the last nine months heading towards the Games. Though she did not go into detail and sounded overly positive, Sanders recapitulated the proceedings of the Dutch team towards Hong Kong. Together with Sjef Janssen (team trainer), Rob Reinirie (team farrier) and Jan Greve (team vet), Sanders constitues the KNHS management team that aims at getting the best possible results at the Olympics.

"We've come nine months and are on track. We won the nations' cup in Rotterdam and just missed the one in Aachen, but we did win the title at the European Championships in Turin," Sanders said. "Last year we selected an Olympic team of nine riders with whom we've been going through an intense trainingsprogram. Not only think of the training of the horse, but also of mental coaching and the improvement and optimalisation of personal fitness."

Besides team management, Sanders is also keeping current with the Dutch Olympic committee and with the actual organisation of the Games. The riders were alerted to the Human Rights issues currently taking place in China (especially in relation to Tibet) as well as the difficult logistics that surround the Games. "I don't think we'll have those 'traps' in Hong Kong as we are not part of the Olympic Village in Bejing. I also think we'll miss a bit of that special Olympic atmosphere but I hope that many fans will come to Hong Kong to have an orange party."

Sanders was also present at the 2008 Dutch Indoor Championships last weekend where she witnessed rides from the Olympic team riders as well as some young combinations. "It keeps the pressure going. Nobody can sit still and relax, because the next generation is coming."