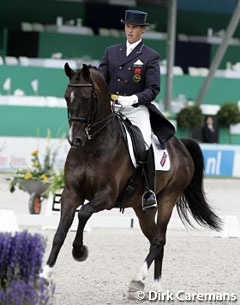 British team rider Carl Hester has withdrawn from competing on the British team at the 2007 European Dressage Championships in Turin, Italy, August 29 - September 2, 2007. Hester's horse Lecantos, an 11-year old Oldenburg gelding by Levantos I and owned by the Irish Sasha Stewart

, has injured himself and is not fit for the Championhips.

"The horse has knocked his off fore, presumably in the field but possibly in the stable, and bruised his tendon. It's a very minimal injury, but we can't risk taking him to Turin as he needs time for the bruising to heal. In two weeks time he'll probably be fine," Carl Hester told the British magazine Horse and Hound.

Team chef d'equipe David Trott told HH that, "It's a real blow because Carl is such a good person to have on the team."