2007 European Pony Championships Kick Off with Trot Up and Measurement

The 2007 European Pony Championships started today with the official vet check and measurement. German multiple gold medallist Konrad did not pass the trot up in the morning and had to be presented for reinspection in the evening.

The 17-year old multiple gold medallist did pass the evening trot up and was eligible to compete at the Championships.

An extremely important fact was that for the first time, since the deletion of the FEI passports, the ponies were measured on site. In the winter of 2006-2007 the FEI received an overflood of complaints that horses have been competing at the pony championships. Under pressure of the press and those complaints, the FEI reviewed the measurement rules and decided to cancel the FEI passports (which contained falsified standing heights of the ponies). The FEI reviewed the allowed height (148 cm) and made a spineless, unfair decision to raise the height to 151 cm (with shoes) and by doing so they washed their hands in innocence and deviated diplomatically from years of fraude in the pony sport. 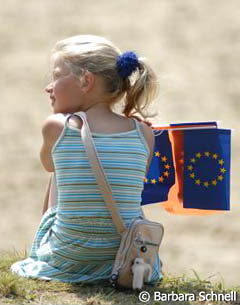 At the 2007 European Pony Championships the ponies were measured twice on site to rule out mis-measurement but the entire process with a mockery of the new rule, for which many people worked hard to get some fairness back in the pony sport. The measurement carried out in a stall inside the stable building was done very generously (so what's the point of doing it??!!). "Horses" were allowed to compete as all ponies were mildly measured with many verdicts that they stood 149 cm while they were taller. It was an absolute farce!

But who cares apparently??!! Let the show begin..