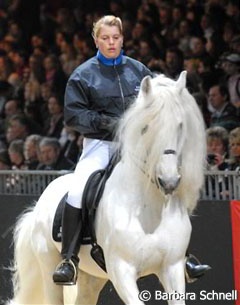 The picture of the white Friesian that was published in Eurodressage's Equitana report earlier this week has caused quite a stir among readers worldwide. So, here's the story behind this unusual crowd-pleaser:

If you're familiar with Friesians, you know that some of them suffer from inbreeding problems. Thirty years ago, the German-based Hillner family received permission from the Dutch Queen to cross-breed several Friesian mares with Jalisco, an Arab stallion standing at stud at Gestuet Marbach, to get some fresh blood into the breed. Exactly one of the foals turned out grey -- a stallion named Negus. After he had spent the first twelve years of his life un-trained, he changed hands.

His new owner, Sylvia Parduhn, started schooling him and was very pleased with his "bomb-proof" character, which allowed her to start riding a stallion at this advanced age. Parduhn also bred several mares with him, and again, one of the foals turned out a grey stallion -- Nero, the now fourteen-year-old horse who impressed the Equitana crowds not only with his color but also with his exceptional gaits. 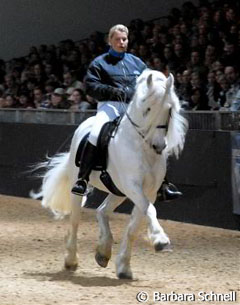 Parduhn, who runs a stable for holidaymakers near Fulda, was very happy to see that Negus had passed on his impeccable character to his son, and so she uses him to breed the pretty and character-sound horses she needs for her farm. She does show him at competitions occasionally, and he has earned one M- and several L-ribbons.

Nero is not a licensed stallion, however, and taking a look at his offspring, it is unlikely that he -- a three-quarter Friesian -- will become the sire of a new breed of white Friesians. So far, he has one son -- by a Trakehner mare -- who is a five-year-old pinto and will very probably turn completely white. Other than that, his offspring come in all colors -- and Nero remains one of a kind.