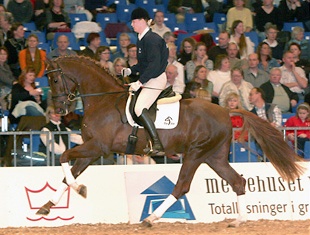 Skovens Rafael became the price highlight in the auction of licensed and non-licensed stallion at the 2007 Danish Warmblood Stallion Licensing in Herning, Denmark, on March 10, 2007. The auction was quite a sensation for the Danish Warmblood society

Rider Per Skærbæk and Lotte Lindgren from Nykøbing Mors, Denmark, purchased the Blue Hors Romanov x Blue Hors Don Schufro offspring from Swiss owner Protesta AG (Sven Kapp), who purchased Rafael at the Danish Warmblood Foal Auction for 75,000 DKK (10,000 euro). The stallion, who is bred by Jens Lund Pedersen and Kristen B. Hansen, will stand at stud in Mors.

"The horse has enormous potential to become one of the world's best dressage stallions," Skærbæk said. "He has a good bloodlines and is very rideable at the same time. In my opinion, Skovens Rafael has no weakness."