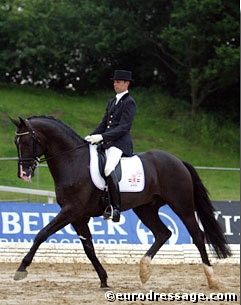 After several weeks of pre-selections in Ermelo, the KWPN stallion licensing committee has selected a group of 187 colts that are qualified to go to the 2007 KWPN Stallion Licensing organized in the Brabanthallen in 's Hertogenbosch, The Netherlands, January 31 - February 3, 2006.

707 colts were entered for the pre-selection.

The massive group of 187 colts includes 97 show jumping stallion and 90 dressage stallions. The sire who will be best represented at the Licensing in February, is the black sire Rhodium, by Ferro (pictured). Nine of his offspring will be up for licensing. Jumper sires Heartbreaker and Chin Chin will both have five sons in 's Hertogenbosch.