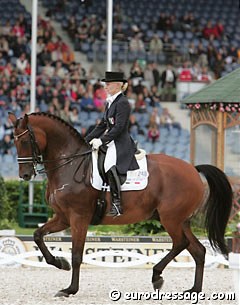 on her Hanoverian Don Vittorio, and the bronze medal went to Gianna Baiocchi and Wiemar VF (59,750%).

The Intermediaire Kur title was won by current Young Rider European Champion Valentina Truppa. With her 9-year-old Chablis, Truppa received 76,417% from the panel of judges for her freestyle ride. In the ranking she was followed by Monica Iemi on Flipper (68,333%) and Pierluigi Sangiorgi with Flourian (67,750%).

Junior riders were, according to the Italian system, split in two categories; the more difficult class (Elementary level) was won by Maria Serena Danovaro on the oldest horse of the event, 19-year-old Teknic (64,667%), followed by Fabia Profili with Carful II (61,292%), and Gemma Prosperi with Welfenstein (61,083%).

During the weekend, the Italian Young Horses championships were also contested. The 4-year-old division was won by the mare Radiosa di Villagana, ridden by Ester Soldi, with 85,200%, which was also the highest percentage of the event; the gelding Doriax, ridden by Norma Paoli (77,600%) placed second, and another mare, Fede del Castegno, ridden by Elena Gariglio, came third (76,200%).

The 5-year-old competition had only one entry; the gelding Eremo del Castegno, ridden by Valentina Truppa. They obtained 84,400%. The 6-year-old division was won by Weltkoenig, ridden by Laura Conz's Bereiter Andrea Stephanie Perron (73,600%), followed by Winning Fever and Fabrizio Tognacci (69,600%).