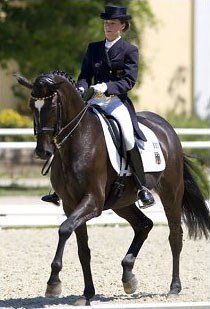 This morning the second part of the team competition for Young Riders took place. The first two riders of each team rode yesterday, that made today’s scoring especially interesting.

By yesterday the Netherlands were 5 % ahead of Germany, but the last two German Riders did their best and succeeded: Theresa Wahler with Ray of Light, Carolin van der Linde with Feinsinn NRW, Andrea Timpe with Welttender und Kristina Sprehe with Rose Noir made the black-red-golden victory perfect, being ahead of the second team by 0,666 %.

Yesterday the Austrian equipe ranked in fourth place, the two first riders were Alexandra Slanec/ Lower Austria with Lorino and Sabrina Reinwald/ Carinthia with Impuls S being 1,688 % behind the French team.

Today the two gentlemen riders in the team showed at their best. Markus Jungwirth from Vienna and his mare Smart Cookie achieved sensational 70,000 % and ranked seven in the individual score list. For Nikolaus Erdmann from Carinthia and his stallion Danny Wilde the score was 68,178 % and for Austria these results meant the bronze medal.