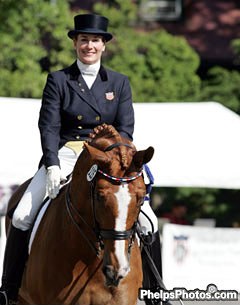 Two 1996 Olympic Team Bronze Medal teammates rode a victory lap together again today for the first time in 10 years – Michelle Gibson riding Lex Barker claimed first place in the USEF Intermediaire I with a score of 72.550% and Guenter Seidel aboard Princeton

claimed second place with 70.900%. “I was having déjà vu about Peron and Graf George – I thought, we need to get on the team again together!” quipped Seidel, naming their respective mounts at the Atlanta Games.

Gibson of Wellington, Florida, with her partner Lex Barker (Longchamp x Wilhelmine), a nine-year-old chestnut Hanoverian gelding owned by Elite European Sporthorses, Inc., came into round two of the championship in the lead spot, having won the Prix St. Georges yesterday with a score of 71.550%. Today the duo produced a fluid, seamless test that earned several 9s. Gibson attributed the consistency to her mount. “He’s pretty much the same every day. He makes it easy for me,” Gibson said, adding with a smile that she “got the changes from yesterday” referring to a minor error in the Prix St. Georges. “Overall I was really happy with everything. Yesterday and today he felt so good in the connection,” Gibson said. “I can ride and push him a little bit and bring him back. He’s very attentive.” She added that it was not one particular movement that stood out as especially outstanding, but rather the overall sense of her mount being so in tune to the contact.

Seidel of Cardiff, California, considerably improved his performance from yesterday when he and Princeton (Popcorn x Weinberg) finished 7th, scoring 67.150%. Princeton is an eight-year-old grey Westphalian gelding owned by Seidel and Richard and Jane Brown. Seidel explained that the leap to 70.90% and a second place finish today could be attributed to the fact that his horse is younger and inexperienced. Seidel also noted that he adjusted his riding after yesterday. “I rode a little less. I think I overrode him yesterday,” said Seidel. “Today I left him a little bit alone and he likes that a little better.” Seidel has only been showing Princeton since the end of 2005, and had participated in qualifiers for the championship only so that he could show at bigger shows with top judges. Seidel noted yesterday that Princeton was “pretty green” to be competing in the championship and he revealed today with a grin that he had not intended to qualify for Gladstone.

Jan Ebeling, a member of the 2003 Pan American Team, scored 69.30% today and claimed third place riding Rafalca (Argentinus x Ratine), a nine-year-old bay Oldenburg mare owned by Ann Romney and Amy Ebeling. The pair’s test was going quite well, with plenty of 7s and 8s flashing on the scoreboard, but during a trot extension, the beautiful mare broke to canter, and the marks of 4 brought the score down. When asked what happened, Ebeling, smiled, “I asked the same question when I went in the corner – what happened? I have no idea. But I’m glad she went really well today, other than that.” Ebeling noted that for a moment he actually thought the rein had broken, and then admitted with a laugh, “I’m halfway to X and I thought, I wonder what they’re giving me for this?”

Ebeling placed fifth yesterday, with a score of 68.750% and said that the I-I test is actually easier for his horse than the Prix St. Georges and that the half passes and longer lines in the advanced test allow him to exhibit his horse advantageously. “I can just show my horse off a little bit better in those half passes,” he noted.

Seidel and Gibson also prefer the I-I for their mounts. “The I-I is definitely a better test for my horse, especially with his size,” Gibson said. “The Prix St. Georges has a lot of stopping and turning and turning again, and for a big moving horse, it’s a lot of maneuvering. The I-I flows really nicely. You can go from one thing to the next.”

All three riders said that they had not made any plans to qualify their horses for the 2007 Pan American Games. However, Seidel pointed out that if the team competing at the 2006 World Equestrian Games does not finish in the top three, the U.S. will need to qualify through the Pan Am Games for the 2008 Beijing Olympics. “That means you need to send a very strong team,” he said. “It depends a little bit on what’s happening the rest of this year.”

Will Gibson and Seidel be teammates again? Remarking on their victory lap together today and Seidel’s déjà vu, Gibson grinned, “Hey, we look good together!”

“He’s super. I love him,” Digironimo said of her mount, Cadanz. As rider/owner, Digironimo has been partnered with the 14-year-old gray Dutch warmblood gelding for four years. In yesterday’s FEI Young Rider Team Test, Digironimo and Cadanz placed third with a score of 63.956%. “Today I went in with the attitude that we were going to give it our all and really show them what we have. Yesterday we kind of fell asleep halfway through,” she noted with a smile. “Today we changed a couple things with the warm-up and we went in and just said ‘we’re going to show them what we have’ and he really did great.”

Digironimo assessed that Cadanz’s trot work was exceptional today. “But I have to say, everything just felt really good,” Digironimo emphasized. “He didn’t have one bad step, he didn’t try to do anything wrong. He was a really good boy.”

Digironimo is currently qualified for the 2006 USEF Dressage Seat Medal Finals in California, July 28-30, and her goal is to qualify for the Region I team for the North American Young Riders Championships in Virginia, August 1-6. “This is our first year at this and we have many more to go so I’m just happy with what he’s giving me right now,” she beamed. Digironimo has been in training with Lendon Gray for five years and noted, “She’s wonderful!”

McKean has been partnered with the eight-year-old Trahkener gelding for one year. The duo trains with Cesar Parra and competed this winter in Florida. Today was their first outing since March. McKean said she was happy that her horse was so steady. “He can be hot,” she explained. She was especially pleased with Stavinsky’s trot work and assessed the best part of her performance today was that the whole test “flowed.”

This year’s USET Foundation Dressage Festival of Champions marks the launch of the USEF Brentina Cup Championship Program. The program’s purpose is to assist and encourage U.S. Young Riders (aged 18-26) in making the transition to Senior Grand Prix competitor. The eight horse/rider combinations with the highest overall average scores according to USEF rankings from qualifying competitions held January through June 2006 were invited to Gladstone. The FEI Intermediate I was offered today as a “warm-up” for the six riders competing in the championship, but the class did not count towards the final Championship results. The rider/horse combinations placed in the “warm-up” class as follows:

The 2006 Brentina Cup, FEI Intermediaire II will be contested on Saturday, June 17.