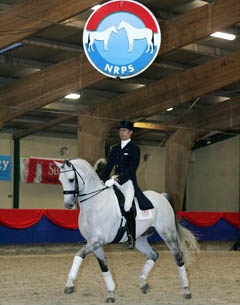 The double World Young Horse Champion Rubels is back in the spotlight. After being injured for one year and after a very slow recovery, the dapple grey NRPS stallion by Rafurstinsels is now ready to compete again. Hans Peter Minderhoud showed Rubels at the 2006 NRPS Stallion Licensing and the grey looked in the mood for action. "I owe a lot to Rubels and I'm happy that he's completely back again. In agreement with owner Renate Landa, we're going to create a show schedule for him," Minderhoud stated.

Rinus Blom, the personal sponsor of the KWPN stallion Idocus when ridden by Marlies van Baalen, has decided to sponsor the KWPN stallion Ro-Lex. In agreement with owner Nico Witte and rider Madeleine Vrees, Blom will be financially supporting the stallion. The horse will be shown in the future as "Blom's Ro-Lex".

Elke and Heinrich Kampmann have assigned a new stable manager for their huge dressage stable and stallion station in Lingen, Germany. The 35-year old Arnd Erben will take over the management of the farm. He will be training, competing and marketing the Kampmann horses. In 2004, Erben won the bronze medal aboard Fazzino (by Florestan x Rivellino xx) at the World Young Horse Championships in Verden.

The Kampmann Cup, one of the biggest dressage show series created and sponsored by the Kampmanns, will hold one qualifier outside German borders. Kampmann announced that a qualifier will be held at Jumping Amsterdam, coincidingly with the 2006 World Cup Dressage Finals April 20-23, 2006. There are nine Kampmann Cup qualifiers. The Finals are held in Bremen, Germany.

According to the German magazine St. Georg, Sjef Janssen has retracted his motion to scratch judge Christoph Hess from the FEI judges list. This has been confirmed by FEI Dressage Committee chairperson Mariette Withages on request of the German Equestrian Federation. St Georg wrote: "The FEI Dressage Committee has informed Janssen that it has rejected his motion. Janssen assumed that Hess has been biased, as he is involved in a lawsuit between Sjef Janssen's partner Anky van Grunsven and the German magazine St. Georg. Hess provided St Georg with a written statement about an incident at the CHIO Aachen 2004, namely that Hess had a conversation with Janssen criticizing the training methods Anky van Grunsven used at the warm up ring in Aachen."

Horses of the Dutch reported on the sale of the VSN Trophy winner Valley. New owner of this Jazz x Wellington offspring is the Belgian Dominique Mohimont. The 4-year old chestnut was property of Nico Witte, Madeleine Vrees and Cees van den Oetelaar and has been acquired by Mohimont as future talent.

Scott Hassler has been appointed the American National Young Horse Dressage Coach, as part of the highly successful Markel/USEF Young Horse Dressage Program. Hassler is the Training Director at the internationally renowned sport horse breeding and training center, Hilltop Farm, in Colora, Maryland, and has been a champion of young dressage horses in the United States, experiencing success both in and out of the competition ring. With an extensive background in developing horses from a young age to FEI levels, Hassler most recently was coach and trainer for Hilltop Farm’s Royal Prince

Busy day for Hans Peter Minderhoud tomorrow at the KWPN Stallion Licensing Dressage Day. He will be riding seven stallions. Four of them in competition (the finals of the KWPN/KNHS Stallion Competition) and three in a show. Florencio, Tolando, Sandreo and Uptown will be shown in competition,  Johnson, Vivaldi and Rubels appear in a show.