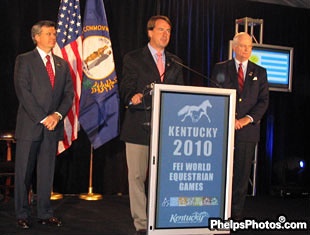 For the first time, the FEI World Equestrian Games (WEG) will be held outside of Europe in 2010, when the games come to the United States. Under the leadership of Governor Ernie Fletcher and his administration

, Kentucky’s bid to host the games at the Kentucky Horse Park came through victorious over Normandy, France, in an announcement made half-way around the world in Bahrain.

The Fédération Equestre Internationale (FEI), which is the international governing body for non-racing equestrian sports, made the decision that the games will be held at the Kentucky Horse Park in Lexington, KY, the Horse Capital of the World.

As the games are expected to have a $100-million economic impact on the state of Kentucky, Governor Ernie Fletcher, whose campaign platform included promises to strengthen and improve the state’s equine industry, was understandably all smiles as he made the announcement to an expectant and enthusiastic crowd of industry leaders gathered at the Kentucky Horse Park. He observed, “This will be an unprecedented opportunity for our Commonwealth to showcase itself to the world. It is both fitting and proper that Kentucky should serve as the host for this prestigious series of events.” He continued, “We are known as the epicenter of the equestrian world and we have a deep appreciation for all things having to do with the horse. We also have a rich history in the equestrian arena that sets us apart from virtually every other region in the world. I know that we will stage a very successful series of competitions, and I know that the world will gain a new appreciation for the beauty of our state and the hospitality of our citizens.”

John Nicholson, Executive Director of the Kentucky Horse Park, now has the honor and responsibility of hosting and shouldering the WEG. “This will be the first time that the FEI World Equestrian Games will be staged at a single venue. That’s because there isn’t another site in the world that has the facilities that are available at the Kentucky Horse Park. When all was said and done, I believe that Kentucky’s heritage as the Horse Capital of the World, combined with the world-class facilities at the park, were what won the games for our state. It will be the park’s privilege and distinction to represent the United States to the world via the games.”

Reporting via telephone from Bahrain, Nicholson expressed his excitement, talked about the bid process and answered questions from the media.

The WEG are comprised of the world championships for seven equestrian sports: show jumping, dressage, eventing, driving, endurance, vaulting and reining. The games are held every four years, in the middle of the Olympic cycle, and are governed by the FEI, based in Lausanne, Switzerland, and recognized by the International Olympic Committee.

The games will take place during two weeks in the fall of 2010 and have estimated ticket sales of 300,000. More than 1,000 athletes representing 50 countries are expected to participate. The games will be broadcast live from the Kentucky Horse Park to 40 countries and reported by more than 1,000 members of the international media.

“The World Equestrian Games is the very essence of what equestrian sport stands for,” said United States Equestrian Federation President and Olympic Gold medal-athlete, David O’Connor. “It is simply the pinnacle of equestrian sport for each of the seven disciplines it represents. It is for the love of competition and in the true spirit of international comradery that we celebrate the World Equestrian Games and what they stand for — the unmatched athletic ability of horse and rider and their unparalleled partnership. This is truly a once-in-a-lifetime event and the United States Equestrian Federation is thrilled to be a part of bringing the 2010 Games to the Kentucky Horse Park.”