Photos of the 3-year old Riding Horse Mares and Geldings 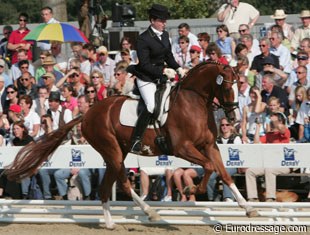 get and stood out by their overall suppleness in their body and first class gaits. The best one of the two was Dantonisius, who is owned by the Swedish Birgitta Kjellin and ridden by Wiebke Borchers. He was eager to work, elastic and uphill. The only remark to be made is the fact that he lightly paddled with his front legs.

Pia Kjellstrom on Dark Carlotta
The black Hanoverian Dark Carlotta. The judges were very generous awarding her trot with a 9.0. Her walk was exceptional and her canter, which could have been a bit more groundcovering, earned her an 8.50.

Klarissa Alexandra Liss on Hermione
The Hanoverian mare Hermione (Hohenstein x Wittinger) was very popular with the judges and earned high marks for her gaits (9.50 for walk, 9.50 for trot, 9.0 for canter). The panel apparently saw something that I didn't see. The horse is extremely high in the whithers, does not have a flowy top line and, though her gaits are generally good, they were definitely over appreciated.

Johannes Westendarp on Dark Rose
The points the judges gave to Hermione should have gone to Dark Rose, an Oldenburg mare by De Niro x Lord Liberty G. This delightful black mare has three outstanding paces, is extremely supple, flowing and engaged in all three movements and she has lovely knee action. Dark Rose won the Reserve Champion's Title at the 2005 Oldenburg Elite Mare Show and she should have earned that same title here in Warendorf.