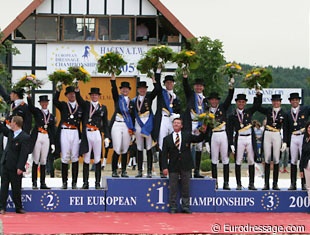 Never before has a nations' competition at any major international championships been so tight at the one at the 2005 European Championships. Germany won its 21st European team gold and Holland had to settle for silver, while Spain and Sweden shared the bronze.

On home turf, Germany put in a strong fight for the gold. "We perform better when we are put under stress," Heike Kemmer said and that's what she did. Her Bonaparte (by Bon Bonaparte) was not in top form with very poor piaffe reprises in the Grand Prix. The extensions were nice though and her score of 72,833% was a bit overrated. Hubertus Schmidt became the anchor member of the German team with a clear ride and a 74,625% score. 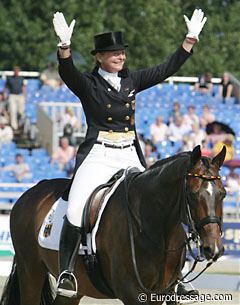 It was German Ann Kathrin Linsenhoff who saved Germany's bacon. For the first time at a major championships in recent years, Linsenhoff was able to ride a clean ride, as she normally makes a mistake here and there. On her 10-year old Sterntaler Unicef (Sion x Manstein), Linsenhoff scored 9's and 10s for the extended walk and trot. Her zig zag, however, had imperfections in the half passes to the left and one of the pirouettes was too big and not jumped round the leg. Her score of 74,250% was more than generous and made her win the Grand Prix on day one. Germany collected 221,708% in total.

Prior to the show, most people betted on Holland to win team gold with Las Vegas Aces Salinero and Lingh on the Dutch team, while Germany had no real mind blowing stars in the absence of Rusty. A fever one week before Hagen made Lingh look like a servant instead of a king in the show ring in Hagen. There was no steam in Lingh in the Grand Prix. Edward Gal literally had to kick his KWPN stallion through the test (72.917%). The piaffe and passage lacked impulsion and there was a mistake in the one tempi's. The horse could not live up to the expectations and showed himself in very poor form in the Grand Prix. Fortunately, he got better in the Special and the Kur, but the damage was done for the nations' competition. 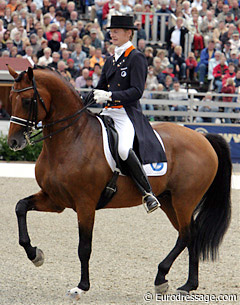 In the Special, Lingh and Gal improved a bit, but they were still not flashy (73.560%). In the kur, Lingh looked better with strong trot half passes, but he made a mistake in the ones and the pirouette right was too big. Furthermore, Edward rode his new trance freestyle but due to the strong wind, the music blew away from the ring and it sounded aweful. The music barely marked the movements and it was just one singular beat throughout the test. "I couldn't hear the music with all the wind," Gal commented, "that's why the movements were not really synchronous with the music." Gal scored 76.650% in the kur and still placed fourth overall with three rides which do not even approach by far Lingh's normal star quality.

Holland's third team member Laurens van Lieren on Hexagon's Ollright experienced a reality check in Hagen. In search for a third star on the Dutch team, the judges have been scoring this rider extremely high at shows in Holland this season. In Hagen, the international panel was much more conservative, especially for his Grand Prix ride for which Van Lieren could have received a bit more than 70.833%. His 70.280% in the Special and 75.050% for a beautiful kur ride on Queen music, ranked Van Lieren 13th overall. Holland got 221,167% in total which was only 0.542% (!!) short of the gold. 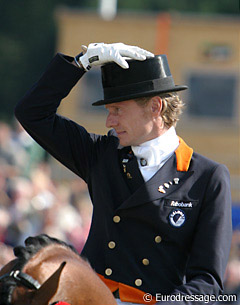 After the nations' cup, the show grounds were buzzing with rumours, speculations, debates, and gossip about the competition. This year was Holland's chance to win gold and still the Germans got away with it. Was it a fair competition? Maybe Linsenhoff and Kemmer were a bit overscored, but the same can be said of Gal. Give Linsenhoff, Kemmer and Gal a few points less, add a couple to Laurens van Lieren's mark, shake it and what would the end result be? Probably the same: Germany gold with the slightest point advantage.

Routinier Anky van Grunsven takes the nations' cup result with a grain of salt. "Silver is nice. We made everyone really nervous and they should get used it," she joked. Amen to that! 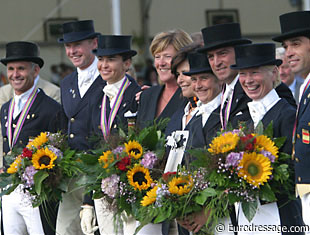 What are the odds for two teams to collect the same amount of points in a nations' cup, one in a thousand? Exactly what Mrs Mariette Withages was thinking. "The rule that the third rider on the team with the highest score would determine the medal was made 13 years ago. We never really expected this rule was going to be needed," Withages said. At the 2005 European Dressage Championships both Sweden and Spain gathered 213,125% points and both landed on the bronze medal spot.

Spanish Ignacio Rambla scored 69,500% on Distinguido, Louise Nathhorst got 68,625% on Guinness, so bronze eventually went to Spain. However, in an act of friendship, fair play and sportsmanship, Spain requested the FEI to change the rule so that they could split the medal with Sweden. FEI Dressage Committee Chairwoman Mariette Withages made several phone calls to the FEI headquarters in Lausanne on Friday and the next, on Saturday July 30, 2005, there was a special medal ceremony in which Spain symbolically handed over the bronze to Sweden. 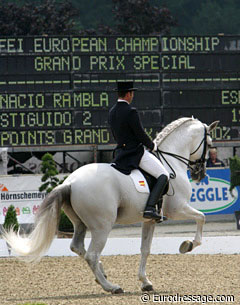 Spain relied heavily on the performances of top scorer Beatriz Ferrer Salat and Juan Antonio Jimenez. Ferrer's Beauvalais did not look as sparkling in the Grand Prix as he did in the Special and Kur. The 18-year old wasn't as electric behind but got better and more fluent later in the competition. In the Grand Prix, he broke into canter in the trot extension, but his flying changes, for instance, were awesome. Ferrer Salat ranked 9th in the Grand Prix with 71.833% and team mate Jimenez followed right behind her with 71.792%.

The surprise ride for the Spanish team came from Ignacio Rambla on Distinguido. At the Sunshine Tour in March and even one week ago at the national show in Bonn (GER), numerous mistakes crept into the combinations' test. In Hagen, everything just came together and Rambla got 69.500% for a fantastic ride. 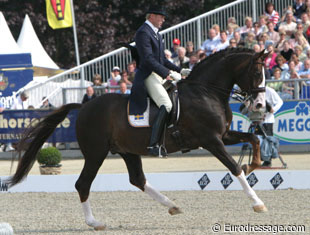 The Swedes supported on Jan Brink's 74,292% for their high placing in the team ranking. Tinne Vilhelmson and Just Mickey showed lovely flying changes that were uphill. Some loss of impulsion in the second piaffe and loss of rhythm in the first extension influenced their mark. Vilhelmson got 70,208% and was the second best Swedish combination. Louise Nathhorst and Guinness excelled in the canter work with outstanding changes and great pirouettes, but there was not enough brio in the trot work to make their score hit 70%. They received 68,625% from the judges.