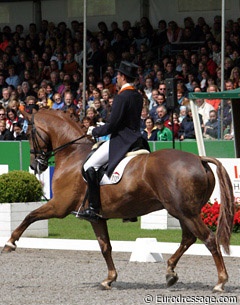 Three out of four team members were already known after the 2005 Dutch Dressage Championships in Nijmeghen in June: Anky van Grunsven on Salinero, Edward Gal on Lingh and Laurens van Lieren on Hexagon's Ollright.

Today, Janssen named the fourth team member, which will be Sven Rothenberger and Barclay II (by Brentano II x Lungau). The reserve is Kirsten Beckers on Broere Jazz (by Cocktail) who has shown to be in excellent form at the CDIO Rotterdam.