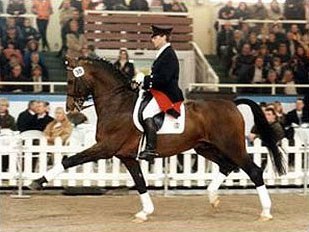 The Westfalian foundation stallion Ehrentusch passed away today due to accute heart failur at the stallion station in Gevelsberg, Germany. The 21-year old stallion was one of the most important sires breeding for the Westfalian society.

Ehrentusch was born in 1984 at Johann Lenzen's stable and is by Ehrensold out of the State Premium Mare Rheinfee (by Rheingold x Pasternak). The bay stallion got licensed in 1986 and won the stallion performance test in 1987. He produced nine licensed offspring , amongst which Ehrentanz, Ehrenpreis and Ehrenwort, and 33 state premium mares. More than 500 offspring are registered with the German Equestrian Federation who all produced overall 450,000 euro of prize money.

Currently, his most renown get in the competition arena are Christina Traurig's Olympic partner Etienne, Nina Stadlinger's Egalité and the Prix St Georges horse Eichendorff, ridden by Victoria Max Theurer.