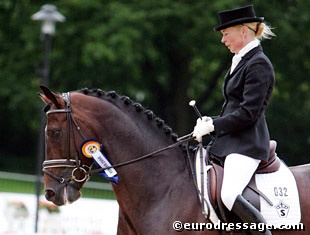 After two selection trials in Flyinge and Stromsholm, six Swedish young horses have been selected to compete at the 2005 World Championships for Young Dressage Horses in Verden, Germany, July 1-3, 2005.

As the Swedish warmblood society is one of the larger breed societies in the world, they have been allowed to select three 5-year olds and three 6-year olds.

The Swedish 5-year olds are:

The Swedish 6-year olds are:

The winner of the Stromsholm qualifier Gunilla Bystrom on Silvano was nominated to compete in Verden, but turned down the offer to go as her stallion Silvano is very busy with the breeding season. Edvin will replace Silvano in Verden