Herzruf, Trakehner Stallion of the Year 2004 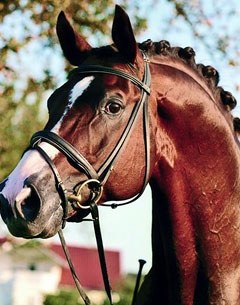 He was bred by Veronika von Schöning and is owned by Dr. Beate Ackermann.

Herzruf won his 100-day Stallion Performance test in Warendorf with 150 points, winning both the dressage and show jumping leg of the test and scoring a 10 for rideability. Herzruf was trained to Prix St Georges level, but was never extensively competed.

Herzruf's most famous offspring is Payano, a dark bay licensed Trakehner stallion out of Pikee (by Arogno). Payano was discovered at the auction in Medingen and is currently the Finnish Grand Prix dressage champion under Terhi Stegars.