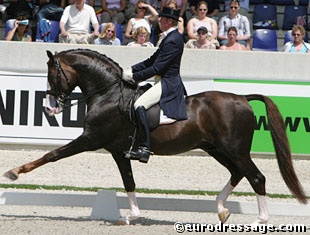 He is owned and bred by Mr. Hans Goransson of Dalheim Farms in Trelleborg, Sweden, and ridden by Swedish Olympic rider Jan Brink.

Briar made a big impression on the international scene after finishing second behind Rusty and Ulla Salzgeber at the 2003 European Championships in Hickstead, England. He placed seventh in the 2004 Olympic Games. He has been amongst the top placed dressage stallions of the world since 2001, and is currently the third highest ranked horse in the WBFSH ranking.

Gestion Salinero with Anky Van Grunsven is number one, followed by Brentina and Debbie MacDonald. His Oldenburg approved younger brother, Okeanos, is in training with Jan Brink at Tullstorp Dressage Stables in Sweden. Okeanos just returning from a first, very successful breeding year at Gestut Kathmann in Germany.