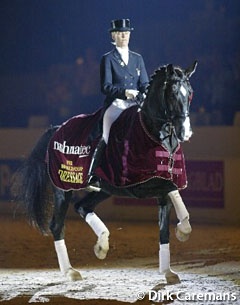 Anky van Grunsven will not be competing Gestion Salinero at the 2004 Dutch Dressage Championships. During the storm that raged over Western Europe on Wednesday June 24, 2004

, Salinero spooked hard when going from the indoor arena to his stall. Due to the heavy wind, a ladder fell over and the racket caused Salinero to jump around in fear.

"He was making such strange jumps that he hit himself and became irregular in the trot," Van Grunsven said. "Everything looked better Thursday morning. It doesn't look serious but I want to be sure and am going to have him checked completely. Three days of competition would just be too much now," Anky added.

Van Grunsven will still be going to the Championships in Nijmegen with two other horses. In the Grand Prix she will riding Gestion Krack C. The only tough competition Van Grunsven will face in the absence of Arjen Teeuwissen, is her own student Edward Gal, who is bringing Gestion Lingh and his recently A-team promoted Gribaldi. At Prix St Georges level, Anky will be competing her Trakehner stallion Gestion Ictenos (by Sir Chamberlaine). 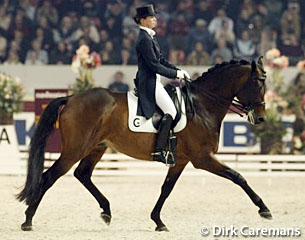 Next weekend, from Friday 25th to Sunday 27th June 2004, the Dutch championships and final Dutch Olympic selection trial is taking place in Nijmeghen. Coinciding with the Dutch Grand Prix Championship are the championships for Fourth level and Small Tour Dutch Dressage-riders (ZZGP riders). For the Fourth level Championship, the riders have to ride three tests ( ZZ-L, ZZ-Z and Prix St. Georges).

Other licensed stallions challenging each other for the PSG title are World Young Dressage Horse Champion Rubels under Hans Peter Minderhoud. Rubels is approved by the NRPS, KWPN and Oldenburg Verband. Imke Schellekens will be riding the KWPN licensed stallion OO Seven (Rubinstein x Doruto) and Edward Gal will be aboard Gestion Nourejev (Cocktail x Ramiro).

Not only stallions will try to conquer a medal, but there also Anky van Grunsven has a bid for the title with Gestion Icentos, the nice young Trakehner horse by Sir Chamberlaine. Tineke Bartels will be riding the Hanoverian mare Sunrise (by Singular Joter) and Judith Scholte will be showing her wonderful horse On Top (by Jetset), who just like Marlies van Baalen en Hans Peter Minderhoud won three out of three championship qualifiers.