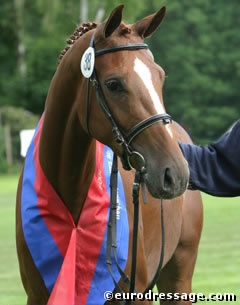 Love Story V, bred by Josef Wernke in Cloppenburg, was selected as the Champion Mare 2004 at the Schlosspark in Rastede at the Elite Broodmare Show on June 12, 2004.

This three year old chestnut mare comes from probably the very last crop by the Oldenburg dressage maker, Donnerhall, and is owned by her breeder, Josef Wernke.

This was the third time that Josef Wernke presented the champion mare: in 1990 there was Miss Ballerina and in 1991 it was Love Story II (by Akzent II) who is the dam of this year's champion mare, Love Story V. This mare line of Schonkleid also produced the licensed stallions Rubin Extra, Controller, Feinbrand, Flagranti, Lauriston and Nariston as well as the Hamburg Derby winning mare, Wendy, and many other top sport and auction horses.

From the field of 110 mares admitted to the show, 109 of which showed up, 23 were in the Brilliantring. Not only the champion mare but seven others were by Donnerhall or his sons, Don Gregory, De Niro, Diamond Hit, Diamond Dream and Dormello. Sandro Hit was the sire of five Brilliantring mares, including the Reserve Champion Mare, Wertvolle, bred by Richard and Werner Sintke in Soegel and owned by Klaus Dirks in Oldenburg . A mare with a jumper pedigree took third place: Gran Lancarina (by Landor S) bred and owned by Claus Cornelius in Schwanewede. Just as with the 1j premium mare, Lady Heida II (by Landor S), Gran Lancarina also received a score of 10.0 in free jumping at her broodmare performance test.

The Brilliantring was made up of daughters by Argentinus, Rohdiamant, Royal Diamond and Rubin Royal as well as Raphael, Sunny Boy and Welt Hit II and there was also a half-Thoroughbred mare by Sevillano xx called Aurelia. A total of 50 different sires were represented by their daughters in Rastede. Sandro Hit was the sire of 17, followed by Dormello and Landor S with seven each.

Jaap Werners, former chairman of the mare and stallion committee for the Dutch Warmblood Verband KWPN, who functioned as commentator in Rastede, was full of praise for the mares that were shown: "I would like to congratulate the Verband for broodmares of such quality." The mares presented are modern sport horses with beautiful faces and in excellent condition.