Charming Out of 2004 KWPN Stallion Licensing 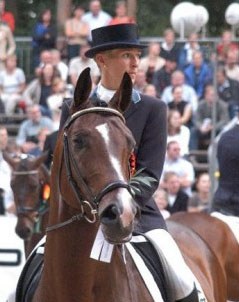 Following in the wake of Lord Loxley's departure, Rhinelander licensed stallion Charming has also been pulled out of the 2004 KWPN Stallion Licensing.

Being a "foreign" dressage stallion, Charming (by Champus x Lancer II) had to compete in at least three ouf of four competitions in the KNHS/KWPN Stallion Competition to qualify for the KWPN Stallion Licensing.

Under rider Susan de Klein, the 6-year old dark bat stallion Charming produced decent results at those Dutch shows, but owner Dirk Haese still got the impression that his stallion was not being fully appreciated by the KWPN Stallion Committee. "They want to wait for an offspring report before they will accept my stallion," Haese told a Dutch equestrian magazine. "I thought I was offering the KWPN an interesting stallion with fresh blood," Haese replied rhetorically.

That Charming is a successful sport horse has already been proven by his fifth place in the 2003 Bundeschampionate finals and his seventh place in the 2003 World Young Horse Championships. Charming has been licensed in Munster, but is also approved for the Hanoverian Verband