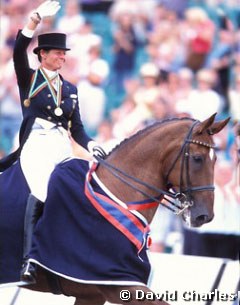 A sell-out, enthusiastic crowd gathered on the final day of competition at Hickstead, England to watch the cream of the competition compete for individual honours.

Due to their formidable form, Ulla Salzgeber was last to go, and didn't the audience know it! As there have not been any truly international competitions in England since last hosting the Championships in 1987, many of the British dressage fans had never seen Rusty perform live so many a heart was pounding waiting for him! The roar of the crowd when he entered the arena to start his test was just as loud as at his last halt and Ulla's laps of honour received a standing ovation!

He duly delivered and raised their expectations with a supple, dramatic test using a contrast of music, which was bold. They scored a breathtaking 85.44% and won the Gold medal, making them the European Champions again despite Rusty taking a couple irregular steps in an extended trot. They showed their talent for half passes and pirouettes finishing their technical and well-calculated test with a half pass to the centre line with so much lift and cadence that most riders would be thrilled if that were their horse's passage! 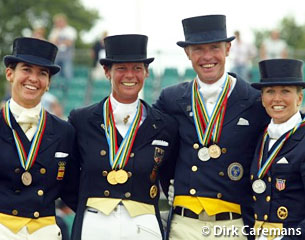 Lisa Wilcox won the Silver medal for the "Open European Championships" as several mistakes with Relevant earned them 79.97% which would often be plenty good enough to leave the others standing! Such was the quality of the competition no combination in the Kur scored less than 71%!

Although, on paper, it did not look as though Salzgeber had much competition to fend off, eventual Silver medal winner, Swedish rider Jan Brink with the twelve year old, Swedish stallion Bjorsells Briar 899 performed a technically brilliant, harmonious Kur and was rewarded by the jury with 81.31%. 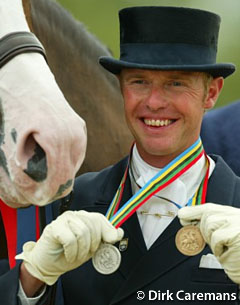 Brink used an interesting floor pattern using a compilation of Simon & Garfunkel music. The crowd really appreciated this partnership and clapped and cheered on their salute as if they had actually won already! They had really won the hearts of the audience!

Spanish "Kur Queen" Beatriz Ferrar-Salat did not quite show her usual brilliance and was seen to be working quite hard aboard Beauvalais who was unsettled causing some mistakes. They rode to Spanish music and scored 78.71% and with their combined score won the bronze medal.

Every competitor felt the warm atmosphere of the Championships. The audience was very appreciative of the tests and enjoyed the highlights of seeing some of the World's best, which would usually involve a trip abroad.