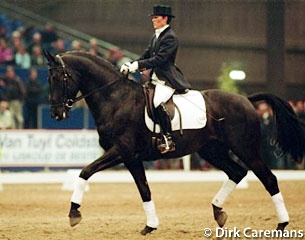 The KWPN registered dressage sire Obelisk has been sold to Broere Stallion Station located in Alblasserdam, The Netherlands. Owner and breeder of Obelisk, Mr. Rutten, has now sold two of his licensed stallions to Broere.

The first one is Broere Montecristo, a bay El Corona x Clavecimbel offspring, who has been successful in the Young Dressage horse classes under Liseon Kamper. Montecristo brought Broere Stallion Station its first international fame. This breeding season, Obelisk will be up for stud at stallion station Bommel in Aarle Rixtel, The Netherlands.

Obelisk is by the Trakehner stallion Matador out of Kida (by Clavecimbel x Ulft). The black has only been licensed for a few years, but he is already known for his quality offspring. Many of his foals won the blue ribbon at Dutch KWPN breed shows. After the 2003 breeding season, Obelisk will be trained in dressage by Broere's stallion dressage rider, young rider Kirstin Beckers.