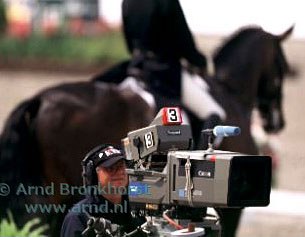 Kate Hoey MP, the former Minister for Sport, has criticized the BBC for their lack of coverage of equestrian sports during a reception to launch the 2003 European Dressage Championships, to be held at Hickstead in August.

Commenting on the refusal of the BBC to cover the event, she said "There are millions of follows and participants in all branches of equestrian sport who have a right to expect a public broadcast service to pay more attention to minority sporting activities. Britain has succeeded in getting this major event for the UK and it would be very short sighted for the BBC to let the opportunity pass of showing and supporting sport at this world class level".

Show Director, Dane Rawlins, confirmed that arrangements were in place for broadcasting from the Championships. "Satellite up-links and facilities for overseas broadcasters are already attracting European television companies and it is a huge disappointment that the BBC have declined to cover the event," he said.

However, support has been forthcoming from UK Sport. "The £180,000 of Lottery funding that UK Sport is investing in the Championships is a significant contribution," said John Scott, Director of Major Events at UK Sport. "This is the second major event that we have supported the British Equestrian Federation with following the success of the European Show Jumping Championships in 1999. UK Sport is keen to see Olympic sports showcased on home soil and we are determined to use this opportunity to stimulate the development of dressage in this country." 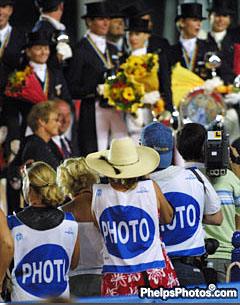 Over 40 nations have been issued with invitations to the Championships and approximately 20 nations are expected to send team and individual competitors to contest the coveted European title. Reigning champion, Ulla Salzegeber, plans to defend her title with her horse, Rusty, who she described as being on top form following his recent World Cup win.

The extra support from the home crowd is expected to lift the British team performance and their chances of success, particularly in their attempt to qualify for the 2004 Olympic Games in Athens. The European Dressage Championships will be the last opportunity for teams to qualify for a place at the Games.

Related Link
Back to the 2003 EDC Index