Gisela Holstein Recovering in Hospital After Training Accident At Home 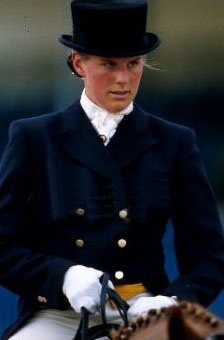 She sustained severe injuries to the lower part of her right leg and her right knee as well as a broken left foot after an accident in which the horse she was holding as part of a training exercise spooked causing her to stumble and fall with the unfortunate result that she was trampled on. It is understood that another horse being loaded into a trailer nearby could have caused the horse Mrs Holstein was holding at the time to take fright.

Gisela was taken to Navan hospital by her daughter Heike and she underwent surgery on Tuesday. The operation on her right leg and knee which involved keyhole surgery and a plate being inserted proved a success. Speaking earlier this evening her daughter Heike (pictured right) reported that her mother is in good spirits and is due to start physiotherapy shortly. Gisela should be out of hospital in about ten days time and son Erik is understood to be organising a golf buggy for his mother so she can get around on her return home.