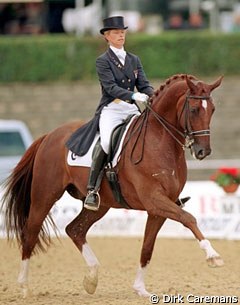 After a disappointing ride and ranking with Gestion Idool in the CDIO Grand Prix test at the international dressage competition in Aachen, Anky van Grunsven is pulling her liver chestnut KWPN gelding out of the Dutch World Equestrian Games Selection Trials.

Scoring only 65.48%, Anky concluded that it was no longer useful for her to try to qualify her Maykel offspring for the Dutch WEG Team.

"I told chef d'equipe Fouarge that I am pulling Gestion Idool out of the WEG selection trials," Anky sai after her Grand Prix. "Idool didn't go well at all. Both pirouettes went wrong and also the extended trot. But overall I have concluded that the judges do not like my horse in this field of competitors. It no longer makes sense for me to use my time for qualifying Idool for the WEG."

Anky, however, can still qualify for the Dutch team with Krack C but this fresh Grand Prix mount might not be ready for a WEG. "My time with Krack C still needs to come. It may be this year or the next, we'll see. If there is a better Dutch combination than me than that's the one that should go to Jerez," Anky commented.