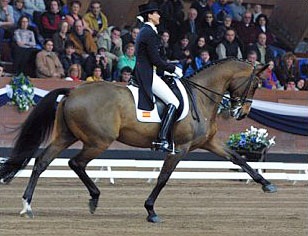 Beatriz Ferrer-Salat, the strong Spanish lady rider, jumps on the top of the podium in the Free-Style Grand Prix at San Patrignano, which today closed the first Italian dressage world Cup qualifier

held in the facilities of the largest European rehabilitation centre from drug addiction.

Beatriz Ferrer-Salat, who recently won the Mechelen Grand Prix in Belgium confirmed, with this performance, to be at present the lady rider in best shape in the dressage world scene and to form together with her Bauvalais an unbeatable combination. The surprising Italian lady rider Laura Conz got near to this result on her Fibrin, putting up an impeccable performance, greeted with a burst of applause by more than 1000 people attending the show. For the six times Italian National Champion is the best result in international competitions achieved till now and, as Cesare Croce underlines, "it's a further confirmation that we can compete to top level also in this discipline and have concrete ambitions for the next future".

The Italian lady rider declared as well: "This result is super and there is everybody's work behind it: the grooms, the owner of the horse, the Federation which always supported and spurred me on, I can't do without mentioning my choreographer Galbiani, who helped me to choose my music".

San Patrignano results upset the 2001-2001 World Cup standings: with three qualifiers left before the Final at S_Hertogenbosh (Holland), the provisional ranking list turns out deeply changed. The Swiss rider Ramsaier , 3rd , jumps to the top of the CDI-W standings, preceding Beatriz Ferrer-Salat, who gains two position. In the 3rd place, Gonnelien Rothenbergen; also the Dutch lady rider went over Isabelle Werth, before San Patrignano at the first place and now 4th. An excellent improvement also for the Italian lady rider Laura Conz, who jumps from the 23° place to the 9°, settling herself amongst the top riders of this discipline.

F.E.I. Dressage World Cup day two in San Patrignano: Cesare Croce, F.IS.E. President, has drawn attention on the great work made in these last 4 years in order to relaunch equestrian sports in Italy and the good competitive results attained by Italian riders in top international competitions: "Nowadays Italy is unanimous held in esteem for its good ability in the organization of equestrian events". He declared "Our international shows, Piazza di Siena, Pavarotti International, Vincenzo Muccioli Challenge, La Bagnaia, mentioning only some of them, can offer jumping shows that can be compared to top events such as Aquisgrana or Calgary. I hope that the friendship and the reciprocal esteem existing between the federation and the community, make it possible to reach great achievements for dressage, as well as for American riding and, most of all, to succeed in organizing the European Championships here in San Patrignano".

An important declaration in this interlocutory day which opened with a Dutch victory in the St. George Prix . Stephanie Peters, on Kelian, turned out to be the best lady rider among the 14 participants, winning with the good percentage of 66.60 %. She placed first before the German rider Uwe Schwanz, who competed as first participant and owned the first step of the podium until the Dutch lady rider's performance. He went second, before the Italian lady rider Maria Milla on Wishing Well (63.75 %), the best of the six Italian combination participating.

In the afternoon, another Dutch athlete, Gonnelien Rothenbergen was the great protagonist of the New Grand Prix, the closing competition of day two. The Dutch lady rider, 5th in the World Cup standings, on C'est Bon, preceded the Swiss Daniel Ramsaier on Parvenue Royal and the German rider Uwe Schwanz riding Ryco. 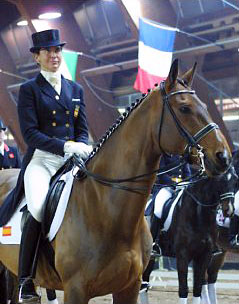 The Spanish Beatriz Ferrer-Salat, the 36-year-old lady rider who is lately in best shape in the world of dressage, wins the opening competition of the Italian qualifier of the FEI World Cup Dressage taking place at San Patrignano. The Spanish athlete, who recently placed first in the Mechelen Grand Prix in Belgium, won on Beauvalais with a very high percentage (71.46%), preceding the Italian Laura Conz (69.80%), riding Fibrin and the Swiss champion Daniel Ramseier currently 2nd in the World Cup list, on Rali Baba a bay 14-year-old horse. Fourth and fifth places for other two top international lady riders, the Dutch Gonnelien Rothenberger and the Russian Elena Sydneva, respectively 8th and 12th in the FEI/BCM ranking list.

Great has been the satisfaction within the Italian team for the surprising placement of the Italian National Champion, Laura Conz (title won right here in San Patrignano last November), who has been able with great authority to place herself among the best riders of the international dressage scene. "It is a very important result" Conz declares "because it confirms the raising level of my horse which is already able to compete at the top level". For the Spanish Ferrer-Salat it is a further evidence of the very high level of performances achieved on the last month, which placed her at the very top of the world ranking list, and a confirmation of her optimistic foreseen of the day before. "Me and my horse are experiencing a great moment of shape and I hope I will be able to raise up the podium of the Grand Prix".

The competition was indeed a valid trial for the qualification to the Free Style competition which will assign on Sunday, the points for the World Cup, and to which the first 12 placed in today's competition will be admitted.