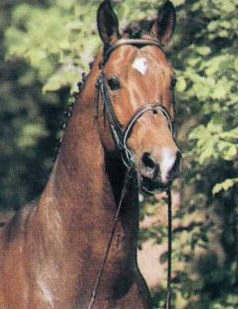 His breeder Margarethe Hagenah from Himmelporten, Germany, received a bronze statue and a check of DM 20,000. Drosselklang II is the tenth Stallion of the Year, an annual award sponsored by Uelzener Insurances.

Drosselklang II was born in 1984 at Hagenah's breeding stable. His dam, Forstlady, already produced a list of top competing horses of which full brother Diavolo was successful under Peter Schmitz in show jumping. Manager of the Celle State Stud, Dr Burchard Bade, already acquired Drosselklang I in 1985 where he served for five years as breeding stallion. Drosselklang II, however, grew up in the stable of Heinrich v. Allwörden in Krautsand, Germany. At the Verden Stallion Market in 1986, Drosselklang II had to compete against the legendary Weltmeyer I and put down the best show jumping scores. The bay stallion moved to the breeding station in Berglage where he is still up for stud today.

Drosselklang II's breeding career almost came to an end five years ago when the stallion injured himself while jumping in freedom. The stallion is nowadays one of the last licensed stallions with Don Carlos blood in his pedigree. Drosselklang II is a top producer in the program for Hanoverian Show Jumper Breeding. Many of his descendants are highly priced at the Verden auctions of which Donnerlitchen is one of the most famous. Owned by Meredith Michaels-Beerbaum, Donnerlitchen was Reserve champion at the 2000 Bundeschampionate. Don Oscar was Dobrock Champion, Dorain became reserve champion at the 1998 World Championships for Young Show Jumping Horses under Karl Heinz Markus. Dorincord participated at the Olympic Games under Canadian Ian Miller. Other known names descending from the Drosselklang II line are Dobel's Frechdachs (Otto Becker), Skyboy and Delany (Rodrigo Pessoa) and Bella Donna (Gilbert Bockmann).