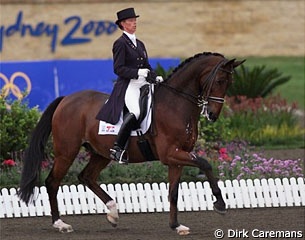 Anky van Grunsven of the Netherlands was in sight of an Olympic Games gold medal on Friday as she held a narrow lead over her long-time rival, Isabell Werth of Germany.

Van Grunsven has previously won three silver medals - one individual and two team, but each time Werth has picked up the gold ahead of her. Werth also narrowly pipped her in the 1998 World Championships.

After Friday's second round of the individual dressage competition, the Grand Prix Special, van Grunsven and Bonfire were in first place on 153.13 points, ahead of Werth and Gigolo on 151.99. Nadine Capellmann and Farbenfroh, of Germany, were in third place on 151.28 points.

"There's one more day to go and I really hope he will be good tomorrow," van Grunsven said of her mount. Van Grunsven said she had led after two rounds in Atlanta and the 1998 world championships before losing to Werth in the final round.

"I've been in this position a lot of times, and that's why I'm very careful," she said.

Werth was happy with her performance - the fourth best of the day - but said a few errors had hurt her chances. "We lost concentration for one second before the extended canter and during the corner, but with the rest I was really satisfied." she said.

The Netherlands's Coby van Baalen, riding Ferro, had a disappointing second round, dropping from third place to seventh.

The final round in the dressage is Saturday's freestyle test, where competitors perform their own routine to music. Of the 25 riders who qualified for Friday's second round, the top 15 progress to the freestyle round. However, one rider from Germany and one from the Netherlands will miss out on the final, despite having a top 15 finish because only three riders from each country are able to qualify.

Arjen Teeuwissen was the fourth placed rider for the Netherlands, finishing ninth overall, but the Germans had a harder task. Their four riders finished second, third, and two in equal fourth position in the overall standings, and it was uncertain which rider would be removed.

Officials were also meeting on Friday evening to decide if the veterinary check scheduled for Saturday morning would be held. The vet check is designed to ensure the fitness of the horses, but dressage officials said the check was unnecessary for their discipline and had tried to drop it. However some teams complained and so the meeting was called to decide the issue.

By John Mair for www.olympics.com