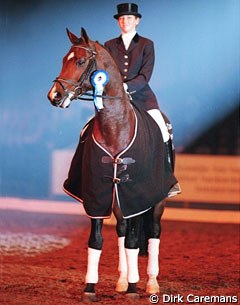 Scoring a winning 72.95% in the preliminary round and 76.17% in the finals, "Romy" transformed himself into the undisputed connoisseur of his age class, the five year olds.

Currently stabled and trained at Johan Hinnemann's barn in Voerde, Germany, Roman Nature will form a steady duo with Van Baalen. The 19 year old Marlies is following an education at the Warendorfer Reitschule in order to become a certified dressage trainer.

Roman Nature's premier successes took place in Germany where he won the federal championships for German Riding Horses in Warendorf under Marie Uffing. The young bay stallion (by Rohdiamant out of an Ehrentusch dam) was then three years old. "He absolved his stallion performance test in Warendorf as eleventh of his age class, achieving a clear lead in the partial index rideability in which he ranked among the top" (Ausgewählte Hengste Deutschlands, 2000). The gorgeously built warmblood is approved for the Rhinelander and Westfalian studbook, and is currently participating in the KWPN stallion licensing days at the Brabanthallen in Den Bosch.