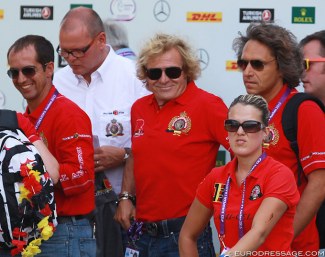 The Belgian Equestrian Federation (KBRSF) has decided to terminate its contract with Sjef Janssen for the position of Belgian Grand Prix Team manager. He has covered this position since 2013.

The 69-year old Janssen was hired in 2013 as Technical Advisor, replacing German judge Volker Moritz who served as Belgian chef d'equipe in 2012. His first contract ran until 31 December 2016.

Janssen was assigned to co-ordinate and structure Belgian dressage beginning at the top level with the Grand Prix riders. The goal was achieve qualification for the 2016 Rio Olympic Games.

At the time, Belgium came from placing 10th at the 2011 European Championships (team score 202.128 point) with Claudia Fassaert as Belgian individual at the London Olympics (27th in the Grand Prix with 70.095%).

Under Janssen's supervision Belgium placed 7th with 207.097 points at the 2013 European Championships. At the 2014 World Equestrian Games the national team achieved an improved team score of 209.557 points and a 12th team place. At the 2015 European Championships in Aachen, the Belgian team had its hayday as it boosted the team score even further (211.101 points) which landed them 10th. The Rio team qualification was not achieved though, but Jorinde Verwimp went as individual and placed 35th in the Grand Prix (70.771).

The KBRSF renewed Janssen's contract until the 2020 Olympic Games in Tokyo with a team qualification set as target. However, as of 2017 team results have dropped.

In 2017 there was no team sent to the European Championships, but Verwimp and Laurence Roos went as individuals. At the 2018 World Equestrian Games the Belgian team placed 9th with 207.499 points. A low was hit at the 2019 European Championships, where the team finished 14th with 205.917 points after one combination was sent into the arena with an unsound horse and got eliminated, while two combinations performing below par. The Tokyo team qualification was not achieved.

The amount of high performance Grand Prix riders in Belgium has decreased over the years. Instead of building a foundation for top level, less Grand Prix riders came to the fore. While in 2014 the GP level squads included 20 riders in total. In 2015 the squad criteria were tightened but it still left 15 riders in the running. However, in 2016 it dropped to 14, in 2017 there were only 12 left, and in 2018 and 2019 there has been an all-time low with just 11 riders submitted to the squads.

The disappointing results at the Europeans in Rotterdam prompted the KBRSF to terminate Janssen's Team Manager contract.

The decision was taken by the board of directors (which includes Stephan Detry, Glenn Maes, Eugene Mathy, Philippe de Meersman, Jean Pierre Lienard) and the "Top Sport Cel" (which includes Wendy Laeremans, Marcel Nejszaten, and Evi Vereecke). The KBRSF Dressage Committee had no say in this, according to one committee member.

The national federation issued a short press release on 30 September 2019:

"After careful considering and in mutual agreement the KBRSF and Sjef Janssen have decided that the current form of collaboration will be terminated at the end of 2919. Sjef was in service of the federation since 2013 and will continue to take up the role of Team Manager until 31 December 2019. The KBRSF and communal federations (VLP, LEWB) wish to thank Sjef for his contribution to the developing of dressage sport in Belgium and are researching different potential forms of collaboration. The Top Sport Cel will meet and discuss the future of (Belgian) dressage sport in the coming months, since 2020 Olympic qualification was not achieved."

Eurodressage requested more clarification about the contract termination as well the federation's opinion on the success of this project for Belgian dressage. KBRSF director Wendy Laeremans refused to disclose any information.

"These are internal affairs, I will not go into your questions," said Laeremans. "At the moment we are communicating nothing more than the press release itself."