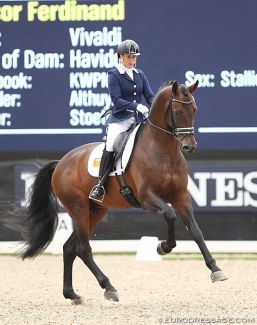 Owner Mirelle van Kemenade-Witlox acquired the stallion as a 3-year old at the 2013 WPN Select Sale for 160,000 euro.

They were 10th in the 2014 Pavo Cup semi-finals and competed on the KWPN stallion competition circuit in 2015 and 2016. They represented the KWPN society at the 2016 World Championships for Young Dressage Horses in Ermelo, The Netherlands, where they finished 4th in the consolation finals.

The horse was then competed by Van Kemenade at national small tour level, but she never took him to any small tour CDI's. She has now asked Van Silfhout for help to school the horse to Grand Prix level.

"Ferdinand is being prepared for the big tour work with as goal to reach the highest level," said Van Kemenade. "We think we can do this optimally with Diederik, who already rides him once in a while."

Ferdinand will compete in the VHO Trophy at the 2019 KWPN Stallion Licensing with Van Silfhout.