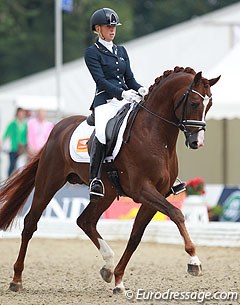 The 4-year old Fanita and the 5-year old Eye Catcher were the winners of the semi finals of the 2014 Pavo Cup held during the KWPN Horse days in Ermelo, The Netherlands, on 13 - 14 August 2014.

In the 4-year old division one of the first starters of the day, Fanita (by Vivaldi x Havidoff), took an early lead and could not be toppled from that number one spot. The judges' panel, including Arie Hamoen, Ton de Kok and Jan Wolfs, awarded Emmelie Scholtens and the bay full sister to KWPN performance test winner Desperado a winning 89 points.

Judge Hamoen was very pleased with the quality of the 4-year olds. "We saw a good group of horses that were all well presented and easy to judge. Fanita is a very charming mare with three very good basic gaits, which you need here to win. She has incredible presence and a very good hind leg usage."

The highest placed license stallion in the 4-year old division was Ferdeaux, presented by Cora Verlouw. He earned 83.5 points and ranked sixth. Seventy-four 4-year old horses were judged in the semi-finals.

The 5-year old division featured 63 combinations and fresh 2014 World Young Horse Championship bronze medalist Eye Catcher (by Vivaldi x Partout) topped the leader board with a whopping 94.5 points. Marieke van der Putten and El Capone (by UB40 x OO Seven), who had to withdraw from Verden after failing the vet check, were second in Ermelo with 91.5 points. German Stefanie Wolf steered mare Erludine (by Jazz x Ferro) to a third place with 88.5 points.

The 26 highest placed 5-year olds are eligible to start in the first round of the Finals on Thursday 14 August 2014.