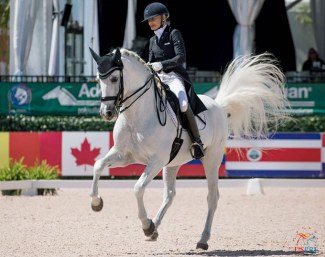 Another season of FEI competition for the PRE horses of USPRE has come to an end and USPRE is proud to present the slate of winners of its annual Breeder’s Cup, the Copa USPRE.

Close to 25 riders declared for this year’s Copa, which is limited to the FEI levels only. However, in 2018, the majority of those who were able to meet the requirements of the contest did so in the most demanding levels and divisions in the sport.

This year, five of our top finishers were riding the Grand Prix, three in the Adult Division, and two in the Youth Grand Prix division. Furthermore, most scores for these riders were earned in the International shows, with very competitive marks!

As a result, the Dressage Committee has decided to name all of this year’s qualified riders to the USPRE Dressage Team for 2019. These riders will receive USPRE clothing, press coverage, and any other support USPRE can provide.